Americans have long known that farmers markets offer shoppers food that’s unrivaled taste and freshness, however, a growing body of research points to the economic benefits of farm-direct marketing. One recent study discovered that, “for every dollar of sales, direct marketers are generating twice as much economic activity within the region, as compared to producers who are not involved in direct marketing.” The study goes on to reveal that for every $1 million in revenue, direct-market farms create almost 32 local jobs whereas larger wholesale growers create only 10.5.

While direct-market farmers rely on you—their neighbors—to grow their businesses, they return the favor. The report’s author’s attribute the outside impact that these farmers exert on local economies to the fact that they source locally. Of the direct-marketing farmers surveyed, 89 percent buy their supplies (“inputs” in farm-speak) from local businesses. By contrast, larger wholesale farms purchased only 45 percent of their inputs from their neighbors. Because direct-marketing farmers are much more likely to patronize local feed stores, farm equipment dealers, and mills, the dollars that you spend at the farmers market stay in your community longer—they may even wind-up back in your pocket!

So the next time you shop at your neighborhood farmers market, remember: not only are you appeasing your taste buds, but you’re giving your community a little economic boost. One dollar at a time.

Learn about the other benefits of farmers markets here.

“Farmers Markets are the most genuine type of commerce. Selling at the market
allowed us to start our business slowly and focus on building our brand and customer base. It gave us confidence. We wouldn’t be here without the market.” Freddy Kaufmann, Owner, Proper Sausages, Miami Shores, Florida 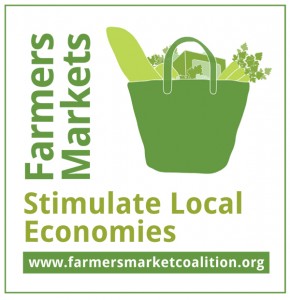