Farmers markets have seen exponential growth over the past decade. Not only did the number of markets rise in 2014 – by over 100 to a total of 8,268 – but so did the use of Supplemental Nutrition Assistance Program benefits (SNAP, formerly food stamps) at farmers markets across the country. 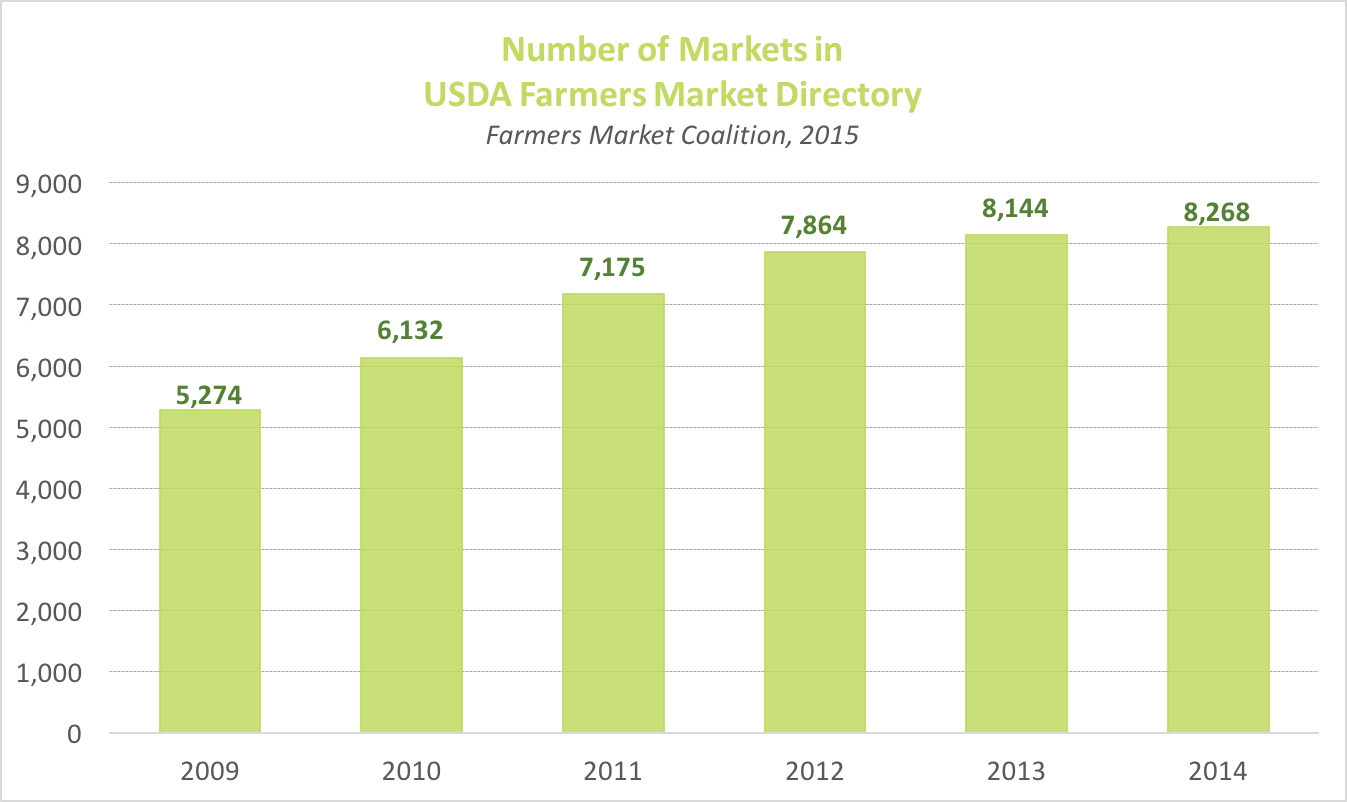 This data indicates that efforts to increase low-income access to farm direct food are working. Over each of the past two years, the number of SNAP authorized farmers markets and direct marketing farmers grew by 27%. Each new authorization represents an opportunity for more Americans to access fresh, local foods. 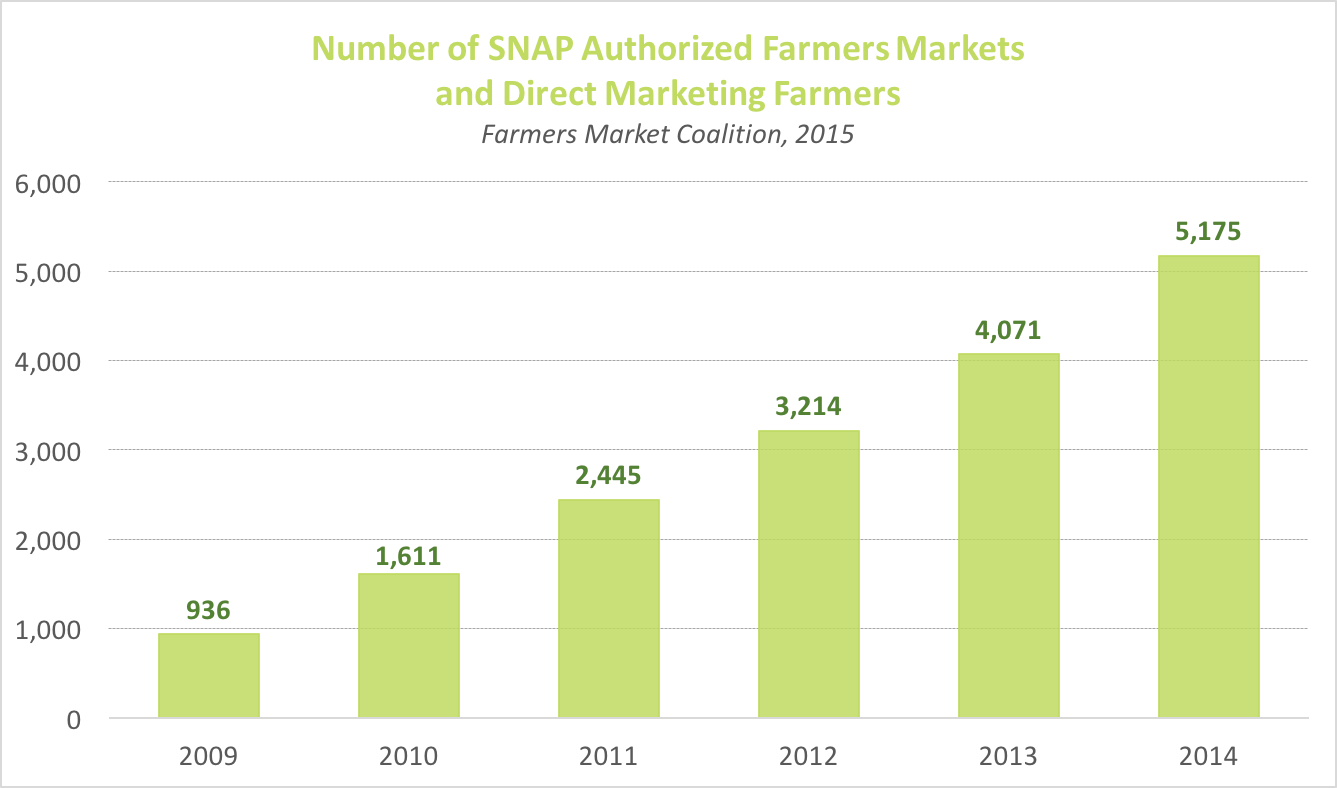 Following this trend, SNAP spending with farmers markets and direct-marketing farmers grew to $18.8 million in 2014. This is more than four times the amount of SNAP benefits redeemed at markets in 2009. 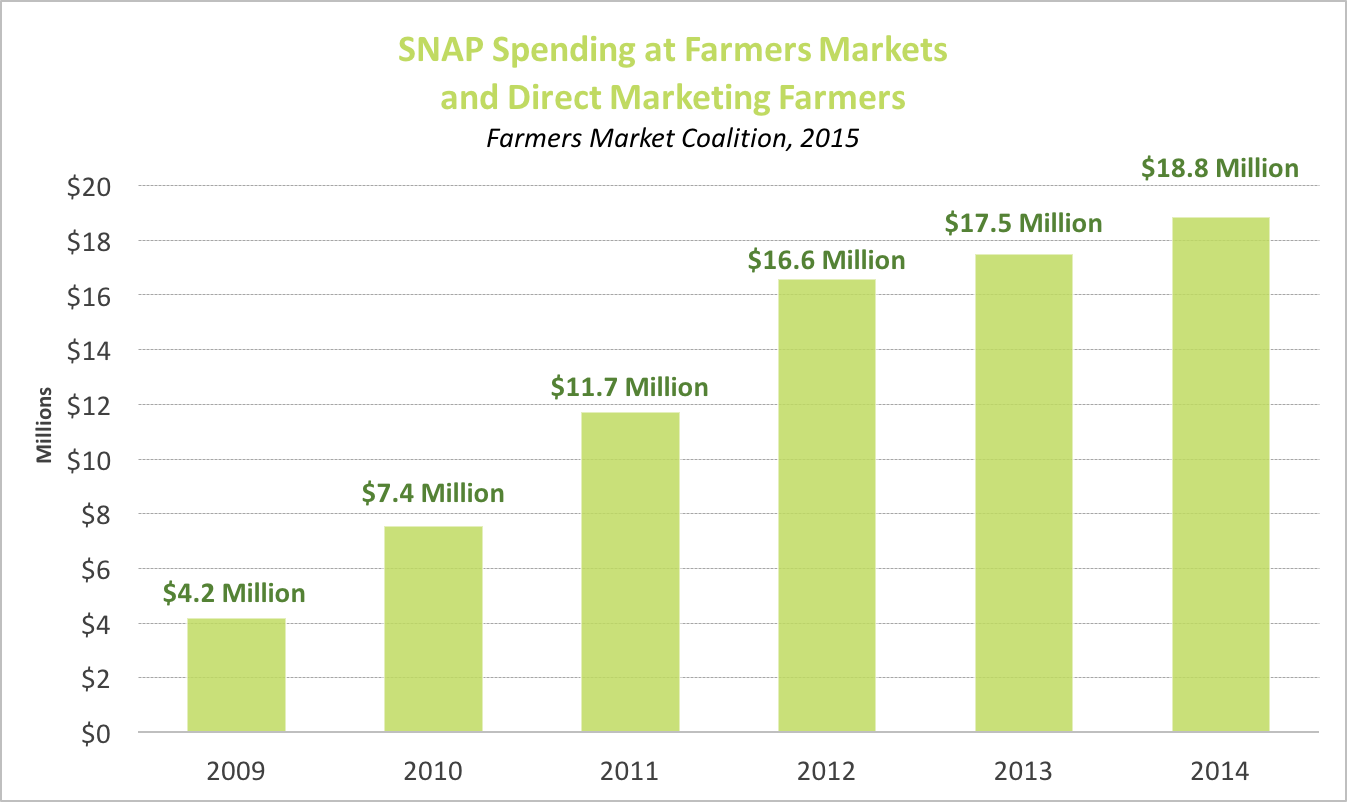 Source: United States Department of Agriculture Food and Nutrition Service. Correction: We previously published that 2013 SNAP Redemption was $21 million. USDA recalculated and corrected this amount to $17.5 million because several retailers were incorrectly labeled.

Although these are tremendous increases, SNAP redemptions at markets remain a tiny percentage of total SNAP benefit spending, which was nearly $70 billion in 2014. Farmers markets saw .027% of overall SNAP spending in 2014 — a 17% increase in the share from 2013. Over the past five years, it has more than doubled (growing by 131%).

The transition from paper food stamps to EBT cards, which are used similar to debit cards, created a challenge for markets and SNAP participants.  The paper vouchers were inexpensive to accept; today, markets need costly equipment and monthly services to accept EBT. The long decline of SNAP redemption at markets from 2001 through 2005 was due to the technical and financial barriers markets faced trying to accept the new EBT cards.

Fortunately, Congress and the United States Department of Agriculture (USDA) began providing support for markets to acquire and operate EBT equipment. This started with the Farmers Market Promotion Program (FMPP), which began receiving substantial funding in the 2008 Farm Bill. It continues today through annual funding from the USDA Food and Nutrition Service (FNS).

Despite this support, the expense remains a major barrier for farmers markets and farmers interested in accepting the EBT cards that replaced paper food stamps. Check back soon for future blog posts on the remaining challenges or read our archived posts on SNAP at farmers markets here.

Other trends noted in the recent SNAP data published by USDA in the “SNAP Retailer Management 2014 Annual Report” are that:

Notes on data updates and calculations: