Over the past five years, the number of farmers markets and direct marketing farmers accepting Supplemental Nutrition Assistance Program (SNAP) benefits increased 263%. That is only one of many promising figures to emerge from a forthcoming USDA Food and Nutrition Service (FNS) report on SNAP redemption rates at farmers markets for Fiscal Year 2010 (October 1, 2009 through September 30, 2010). Since the publication of state by state data from fiscal year 2009 in the Real Food, Real Choice report last summer, it’s probably not a stretch to say that many have been on the edge of their seats waiting to see this year’s national trends. 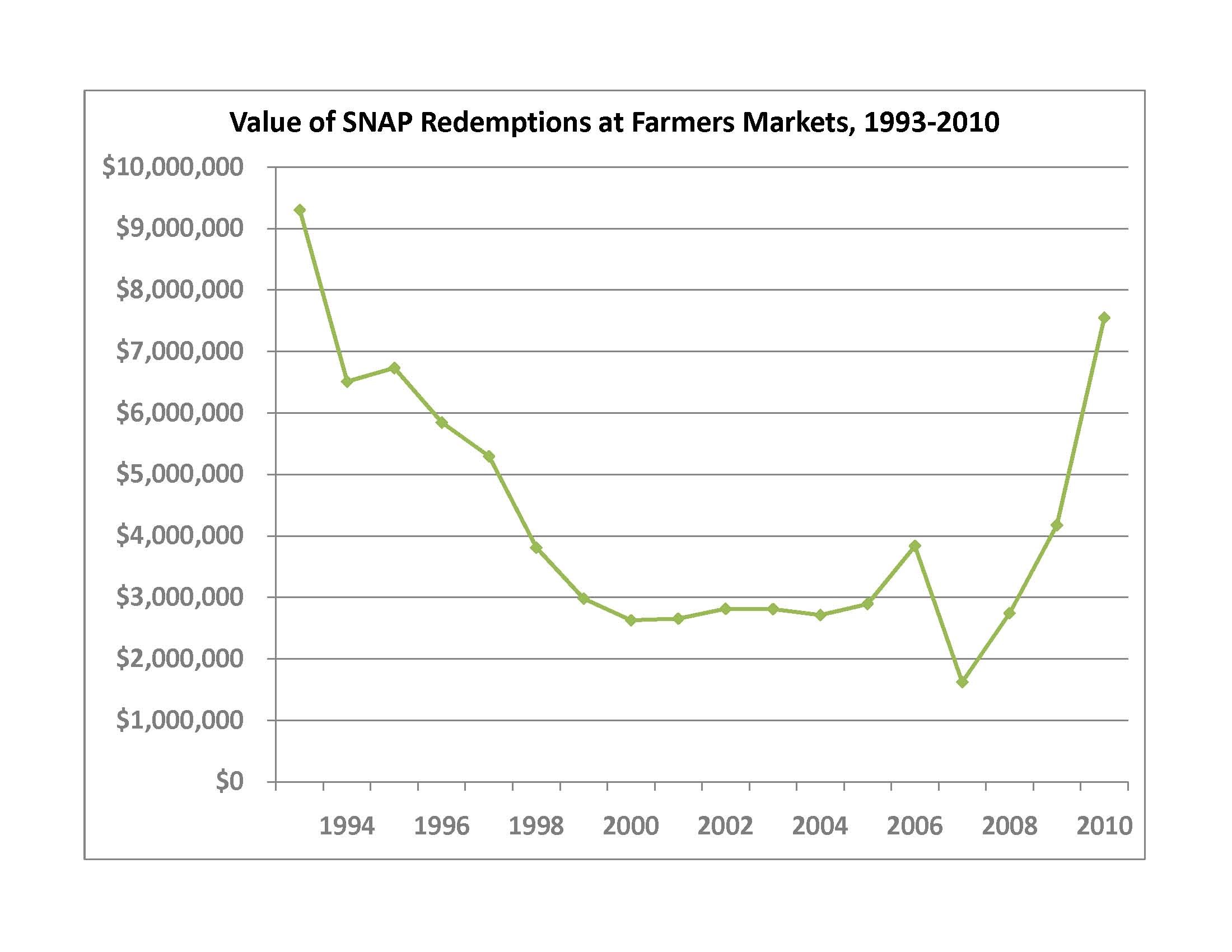 The good news is that, according to these numbers, there has been some extraordinary and rapid growth in SNAP redemption at farmers markets across the country. While there was approximately $50 billion in SNAP redeemed nationwide in 2009, there was $64 billion in 2010, in part due to high unemployment and more widespread eligibility for the program. Susan Acker, Public Affairs Specialist for Federal Nutrition Services, notes that “[SNAP] issuance grew by 29% overall in FY 2010, compared to the previous fiscal year.”

SNAP redemption at farmers markets clearly emerges as a trend that cannot be explained simply by a greater amount of funding for SNAP. According to Acker, “benefit redemption at direct marketing farmers and farmers markets grew by more than 70 percent in FY 2010, compared to the previous fiscal year.”

Of the $64 billion total SNAP dollars that were redeemed in 2010, .012% occurred at farmers markets, an increase from the .008% rate in 2009. With a long way to go, this increase nevertheless represents the true success of last year —that little by little, more SNAP participants are choosing to use their benefits at farmers markets. According to SNAP data, program recipients made 453,711 purchases at farmers markets and direct marketing farmers nationwide, with an average purchase amount of $16.69.

The data gets even more interesting once these numbers are put into context.  For example, the number of farmers market retailers accepting SNAP increased by 72%, from 936 in 2009 to 1,611 in 2010. It’s not easy to draw hard conclusions about trends, however, based on this data. With questions arising about the distinction between farmers market organizations and individual farmers, FNS created a new store type in their system, Direct Marketing Farmer (DMF), in August 2010. However, re-categorizing previously authorized retailers probably sounds easier than it looks. As FMC learned in a meeting with FNS staff, for example, retailers in the Saint Louis area had originally been (erroneously) classified as specialty stores, and were re-classified as farmers markets in 2010, which makes the redemption growth in Missouri appear artificially higher than it actually is. According to Susan Modine of the Benefits Redemption Division at the Food and Nutrition Service at USDA, the new Farmers Market category “may include some individual farmers selling at markets – we really do not have any way of distinguishing them at this point.” FNS estimates that DMFs accounted for less than a third of all “farmers market” redemptions in 2010.

This means that of these 1,611 authorized retailers are composed mostly of farmers markets, but direct marketing farmers as well. Additionally, umbrella organizations operating SNAP/EBT might only count as one authorized retailer, even if they operate SNAP/EBT at multiple markets. So in this case, counting “one” farmers market, might mean there are actually two or more markets that are accepting SNAP.  The Agricultural Institute of Marin, for example, operates SNAP at eight markets in the San Francisco Bay area, with only one FNS permit. This means that they are only counted once.

Further complicating the issue is the fact that only 1,040 of those 1,611 authorized retailers actually conducted SNAP redemptions in 2010, meaning that more than 500 farmers markets and direct marketing farmers with FNS permits did not actually do any SNAP business that year. It goes without saying that this alone is an area in need of exploration, and FNS’ Office of Research and Analysis is investing in research (open for comment until May 23rd) to better understand why this is the case.

Other discrepancies may appear when FNS figures are compared to state’s records. Ames Robb, EBT Director for the Department for Children & Families in Waterbury Vermont, says that her state’s records indicate a “110% increase in sales between 2009 and 2010.” This is a slightly smaller increase than the 155% increase indicated by FNS’ data. Mercedes Taylor-Puckett, Local Foods and Farmers Market Project Coordinator for Kansas Rural Center, noted a similar inconsistency.

Such discrepancies seem minor, however, in light of the consistent reports from both sources that SNAP sales have seen a very sharp rise. Moving forward, both sets of data will likely need to analyzed more thoroughly.

In looking at the combined redemption totals of farmers market organizations and individual SNAP-authorized farmers, several states stand out for their market increase in redemptions (see table below).  Many of the states with historically low redemptions saw particularly huge increases-Maryland of nearly 1,500%, Maine’s a startling 3,804%, and Missouri 4,661% (the latter in part due to reasons explained previously). Eleven other states experienced growth rates of over 200% for SNAP redemption at farmers markets: Alabama, Idaho, Illinois, Kansas, Massachusetts, Minnesota, North Carolina, New Mexico, Oklahoma, Texas, and West Virginia.  Some states, like Florida, New Jersey, Mississippi saw actual decreases. While the precise factors behind this smaller phenomena of decreased redemption rates are unknown, it’s possible that there were retailers initially classified as farmers markets (and therefore showing in the 2009 data set) that were since discovered by FNS Regional Field offices to not qualify as multi-stall markets and subsequently re-classified to another category of fruit and vegetable retailer by the FNS regional field office. This, too, is an area for further exploration.

A number of factors have been cited as contributing to the increase in SNAP sales. Ames Robb listed the growing number of markets that accept SNAP as an important contributing factor to Vermont’s impressive growth in SNAP at farmers markets, too. She said that Vermont “went from 16 markets in 2009 to 26 in 2010 and… is on track to have more than 35 markets in 2011; about half the markets in the state.”  Vermont is by no means alone in seeing that kind of growth, thanks to grant programs like the Farmers Market Promotion Program (FMPP).

Innovative outreach and incentive strategies have also been game changers in the world of SNAP at farmers market. Wholesome Wave’s (WW) Double Value Coupon Program, and others like it, add value to the purchasing power of SNAP users at farmers markets. Typically, the program works by doubling a SNAP recipients purchasing power at market. The SNAP recipient comes to the market, swipes their card and deducts $10 from their SNAP account, and then receives $20 to spend at market. Preliminary data from locations ranging from San Diego to East Boston “often indicated a 300% increase in SNAP and WIC use at farmers markets with the introduction of ‘double voucher’ incentive programs. Research presently being conducted by FNS how farmers markets interact with nutrition programs and incentives should prove useful in understanding the elements correlating with success in integrating SNAP.
Other impressive gains can be attributed to some significant pieces of legislation that have been pushed through at the state level. Dennis Ryan, of the 61st Street Farmers Market (a program of  Experimental Station), worked with other Chicago farmers markets and the Illinois Farmers Market Network on the issue of EBT acceptance, and even received FMPP support to train other markets throughout the state.  Along with others in the Illinois Farmers Market Network and the Chicago Department of Family and Support Services, Experimental Station and Chicago Green City Market began to advocate for what would ultimately become the Illinois Farmers Market Technology Improvement Program Act. While the act itself did not include a funding authorization, the legislation was part of the same wave of energy seeking to connect SNAP recipients with fresh, healthy local, food, concurrently leading to Illinois’ remarkable 480% increase in SNAP dollars spent at farmers market in 2010.  According to Ryan, “in 2009, Illinois only had 10 markets accepting SNAP, then 25 in 2010, and we expect approximately 45 in 2011. Along with the Illinois Farmers Market Network, we have worked to provide training, showcase best practices, and offer support for markets interested in becoming SNAP authorized.”
Other farmers market associations have listed partnerships with other organizations as a critical part of their success. Dru Montri, Director of the Michigan Farmers Market Association, reported that Michigan has “seen remarkable growth in SNAP redemption at…farmers markets again this year.  Much of that growth can be attributed to the work of the Michigan Farmers Market Food Assistance Partnership.” She was also quick to point out that FMPP grants, a common factor that led to success for other states, supplied Michigan with the necessary funding “to hire Amanda Segar as the Partnership coordinator… [who] has been a tremendous asset.”

In a recent article in the New York Times, Mark Bittman wrote about six things to feel good about in the food movement. One of those was the growth of farmers markets, and a brief mention of efforts to facilitate SNAP access at those markets. Innovative outreach and incentive efforts at the grassroots, the hard work of state farmers market associations, the passing of important legislation, and the sweat equity of market managers, farmers, and vendors are beginning to make necessary strides towards improved food equity at farmers market. While there are some lingering questions about the precise statistics for each state, and FMC continues to explore these areas, it’s clear that the trend is upward.  A year from now, what we will be saying about 2011 data?   Let’s hope that next spring, we’ve met and exceeded our EBT expectations. 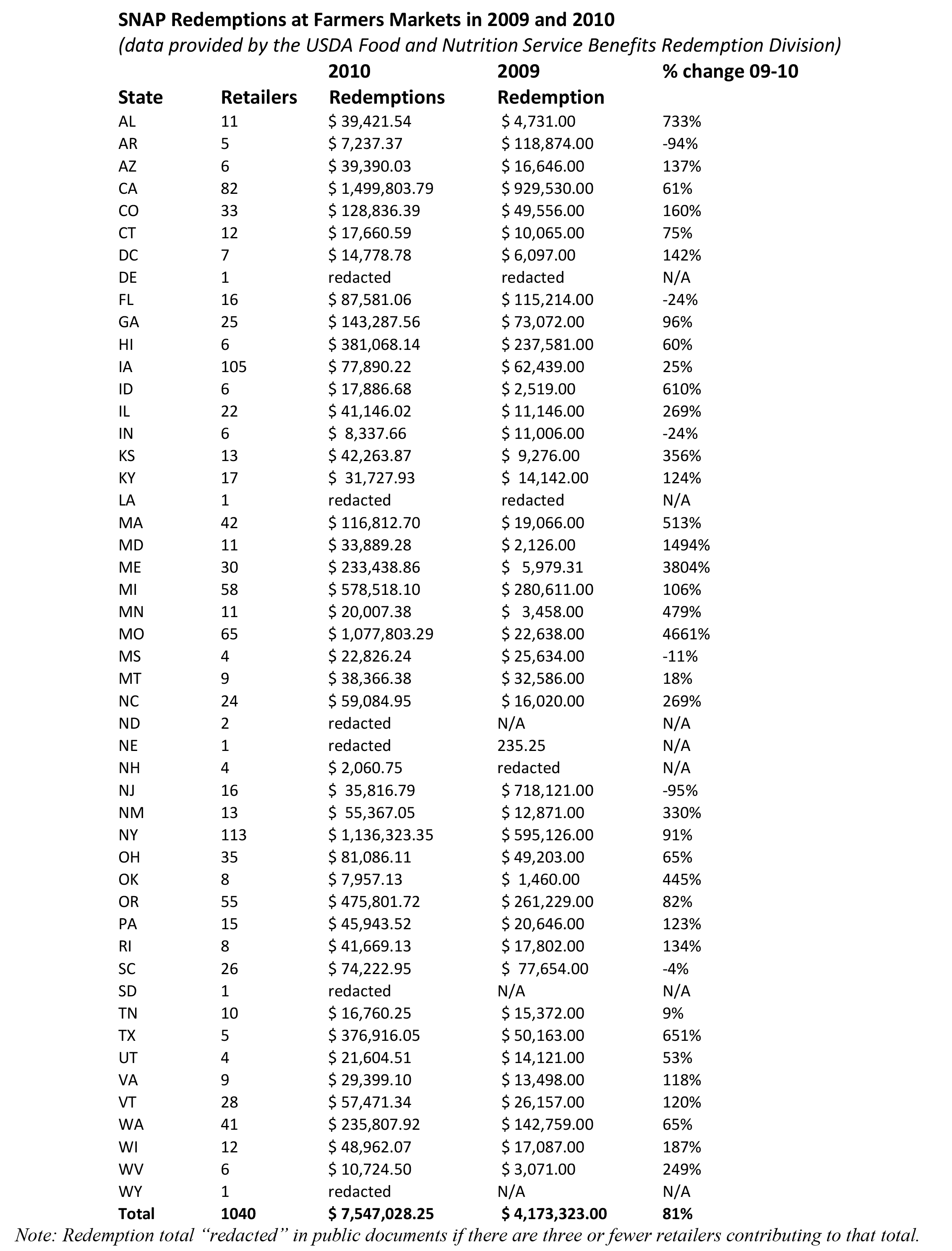 Note: Data provided by the USDA Food and Nutrition Service Benefits Redemption Division. Redemption  total “redacted” in public documents if there are three or fewer retailers contributing to that total.