The New Year seems to have kicked off with less than positive news for farmers markets. The nine-month farm bill extension that passed late New Years Day surprised many by failing to provide mandatory funding for a variety of smaller programs that support farmers markets and direct-marketing farmers. Meanwhile, evidence is growing that farmers markets are effective at increasing food access to underserved populations around the country. Here we explore 2012’s growth in Supplemental Nutrition Assistance Program (SNAP) sales at farmers markets, and take a preliminary look at how new USDA Food and Nutrition Service funding for SNAP at farmers markets is providing opportunities and lessons learned. 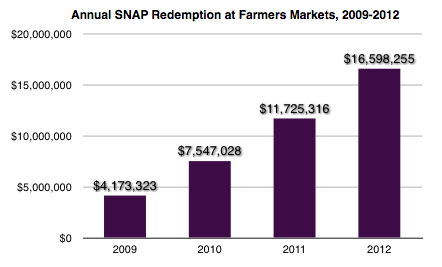 In Fiscal Year 2012 (October 1, 2011 through September 30, 2012), 769 additional farmers markets became authorized SNAP retailers, enabling them to increase farm income for market producers and increase consumer access at these locations. This represents a 31.5% increase in authorized farmers market retailers since 2011 and an eleven-fold increase in the past decade.

SNAP sales increased 41.6% between 2011 and 2012, and have seen a 490% increase in the past decade. Aside from increased interest among markets and farmers to expand their customer bases, a few additional factors may have contributed to this expansion.

One obvious factor fueling the increase in SNAP sales at farmers markets is the role of the Farmers Market Promotion Program (FMPP). Since 2008, more than 20% of all FMPP grant dollars have supported the expansion of SNAP at farmers markets. In 2011 (the grant cycle that would have had an effect on 2012 SNAP sales), FMPP funded 17 new and 20 existing EBT projects. Further, 64% of the 2011 awarded projects address that year’s program priority of increasing healthy food access in food deserts and low-income communities. 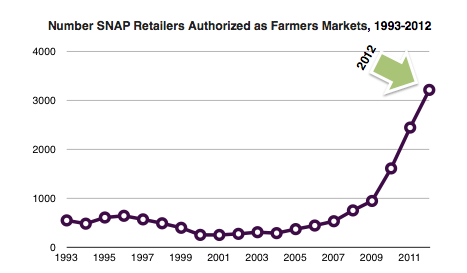 In May 2012, USDA Food and Nutrition Service (FNS) allocated $4 million to help states expand availability of wireless technology in farmers markets not currently participating in the Supplemental Nutrition Assistance Program (SNAP). These funds were distributed so that states with fewer markets accepting SNAP received more funding. With the goal of leveling the playing field between direct-marketing farmers and traditional brick and mortar retailers, this watershed program allows state agencies to provide free wireless point of sale devices to farmers markets previously not authorized to accept SNAP benefits. As FMC reported in a July article “States act fast to distribute wireless SNAP/EBT technology to farmers markets,” the timing of the 2012 announcement (and states’ subsequent outreach to markets) presented challenges to markets eligible for this opportunity before the close of the 2012 market season.  About $1.9 million was actually spent or obligated by state SNAP agencies by September 30th, with the remaining allocated dollars to be rolled over for use in 2013. Thus the true effect of the technology funding will not be seen until 2013 redemption data is available. Throughout 2013, the number of markets redeeming SNAP will likely grow as states more actively reach out to interested and eligible farmers markets, helping them acquire SNAP authorization, and providing them with appropriate technology for integrating SNAP into their operations. 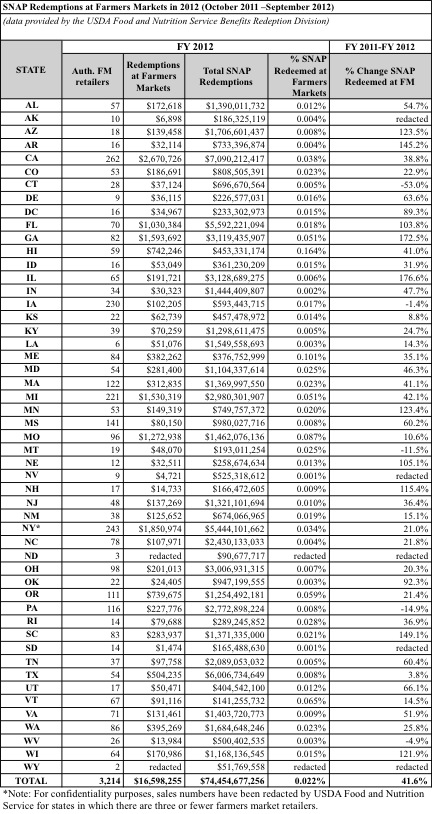 With much of the 2012 POS device allocation not yet spent, FMC conducted a survey of its members to better understand how the FNS funds were being utilized. One hundred sixty seven (167) responses were received. Results show that 77% (n=128) of respondents are currently SNAP authorized, and among those organizations, 80% (n=102) received some kind of assistance when applying to USDA for authorization—either from a state department of agriculture, state SNAP agency, the Farmers Market Coalition, a regional FNS office, or other peers/market managers. Of those authorized to access SNAP, 88% (n=113) conducted at least one SNAP transaction in 2012.  Only about 38% said they received a free device with the assistance of their state agency. More than two-thirds (n=129, 77%) were aware of the USDA FNS funding that was provided to states to increase SNAP access at farmers markets. Most respondents heard about this opportunity through a state farmers market association/network or FMC announcements. However, only 23% (n=38)of all respondents said that they attempted to acquire a free wireless POS device from their respective state agency in 2012 or 2013. Of those that cited challenges or barriers to taking advantage of this opportunity, insufficient staff or time to initiate the process of receiving a free wireless terminal was the most frequently cited. Member feedback in this survey suggests that utilizing community partnerships and strengthening community relationships will be important resources for maximizing return on these FNS funds through personalized outreach and information/resource sharing.  While providing needed funds is important, farmers markets are still trying to determine best practices for connecting fresh, healthy food with those who need it most. Members report successful strategies such as working with organizations who are already providing services to both farmers markets and SNAP participants to better bridge the gap between farmers and under-resourced consumers.

Sources at the FNS Benefits Redemption Division say they are currently developing a document that reviews the states activities that were funded through the allocation. At this time, FNS staff does not know when this document will be publicly available, though it could be a valuable resource for states to learn lessons from across the country and glean innovative ideas to replicate in their localities. The Farmers Market Coalition will be providing its member survey data to FNS in an effort to help ensure effective use of these valuable technology resources in 2013 and future years.

Farmers markets provide innovative ways to connect people of all incomes with fresh, nutritious produce while supporting local farmers and economies. While SNAP redemptions at farmers markets only accounted for .022% of all SNAP redemptions in fiscal year 2012, continued dedication and partnerships at the local, state, and national levels will help ensure that direct-marketing agricultural producers have equal opportunities to serve the more than 47 million Americans participating in SNAP.