Columbia, Missouri – In 2009, the Columbia Farmers Market recognized that its growing customer base was not reflective of Columbia’s great diversity, and very little of the $5 million spent on food in Boone County through the Supplemental Nutrition Assistance Program (SNAP) was going to local farmers. According to a 2008 Boone County Lifestyle Survey, 73.5% of respondents reported that reasonably priced fruits and vegetables would help them eat healthier. Recognizing the potential for the Columbia Farmers Market to be influential in solving these community concerns, then market manager Caroline Todd and a market volunteer applied to the USDA Farmers Market Promotion Program (FMPP) in spring 2009 to raise awareness of the market’s ability to welcome SNAP benefits. From nearly 500 proposals, Columbia Farmers Market’s was among 86 selected for funding, to support efforts to expand customer diversity and increase farmer sales. 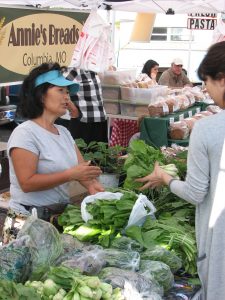 A grower offers a customer advice about cooking her local greens.

First organized in 1980, the Columbia Farmers Market (CFM) was founded by a small group of Missouri farmers selling their produce out of pickup trucks at gas stations and other locations around the city.  Today, the Columbia Farmers Market is still a vendor-run market of 80 producers—the largest market of its kind in Missouri. CFM welcomes an average of 4,500 customers each week, all seeking locally grown and produced food, artisan products, and plants.

As part of this project, radio advertisements were used in the 2010 season to reach families and individuals participating in SNAP who were not already attending the Market. In addition to radio advertising, the Columbia Farmers Market purchased large signs promoting their acceptance of SNAP benefits. Because the Market is located behind an indoor swimming pool and is not very visible from the road, posting signs one to two miles from the Market proved to be an important awareness-raising strategy. The new signage and radio spots also began to generate conversation around the community about SNAP, leading to one of the most important ways of marketing: word of mouth.

New visibility about the Market’s initiative to increase access attracted new community partners, too. Sustainable Farms and Communities, a nonprofit organization committed to creating fruitful collaborations, partnered with the Columbia Department of Public Health and Human Services and CFM to establish the Access to Healthy Foods (AHF) SNAP benefits program. Community members donated funds to launch AHF, which enabled the Market to match the value of SNAP benefits dollar for dollar. The Health Department helped identify families that were most in need, and Todd attended WIC meetings, providing education on seasonality, price comparisons, and food preservation.  “With the help of SF&C and AHF, we’ve been able to help many families in need gain access healthy foods,” says Market Manager, Corrina Smith. 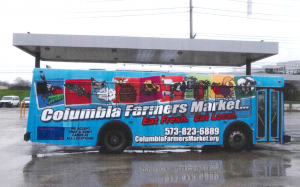 In the fall of 2010, the Columbia Farmers Market had their first annual Market Gala, an event with a guest speaker and a feast of farmer donated food held in a local hotel ballroom. Tickets to the Gala were sold to customers and community members, with farmers themselves donating tickets to their WIC and SNAP customers.  According to Todd, this “truly represented how the vendors recognized the importance of welcoming these new customers to the Market community.”

Within just three months of the FMPP-supported radio advertising, the Columbia Farmers Market more than quadrupled the amount of SNAP benefits going directly to local farmers in and around Boone County in 2009. On the ground, the increase was rapid, as CFM farmers’ sales to SNAP customers rose from $400 per month to $400 per market day, with a total SNAP redemption increase of 77%. The Market opened a satellite location across town, providing fresh local produce to a broader customer base while increasing farmer sales and income. To further help Central Missouri’s farmers benefit from increased SNAP customer patronage, the Columbia Farmers Market created what Todd referred to as “The SNAP Bus.” This city bus is wrapped with colorful interior and exterior ads informing riders, as well as other drivers and pedestrians, about the opportunity to buy fresh local food at the Columbia Farmers Market with SNAP benefits. The city also added a special farmers market stop to the schedule to further ensure access for residents of Columbia’s food deserts. 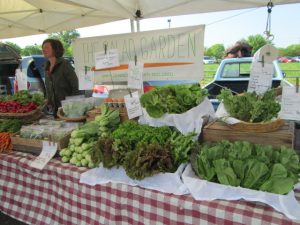 The Columbia Farmers Market is still seeing the benefits of their Farmers Market Promotion Program grant, even three years after receiving it. The matching program has continued to grow as the number of participating families doubled from 2011 to 2012. There were 93 families enrolled in 2012, 81 of which visited the market at least once, with 56% attending five or more times. According to a survey of participating families, over fifty percent reported that their kids were eating more fruits and vegetables and eating fewer processed meals. The Columbia Farmers Market has opened 4 additional satellite weekday markets that all accept EBT benefits.  “The Farmers Market Promotion Program grant was vital to helping CFM reach out to customers that wouldn’t normally shop at the farmers market, “says Market Manager Corrina Smith. By advertising with the SNAP Bus and creating a new bus route through “food deserts” we are helping people get fresh local and healthy food.”