Stillwater, Minnesota – “We aren’t gardening here—farming is a profession that can provide important income for these immigrants and their families,” says Glen Hill, Executive Director of the Minnesota Food Association (MFA) in Stillwater, Minnesota. MFA was awarded a  Farmers Market Promotion Program (FMPP) grant in 2009 to develop and pilot a replicable community supported agriculture (CSA) model that also trains new immigrant, refugee, and other socially disadvantaged farmers in certified organic production and direct marketing strategies. This puts affordable fresh organic produce on more tables in and around Stillwater while growing a crop of new vegetable farmers who can make significant contributions toward their family incomes. 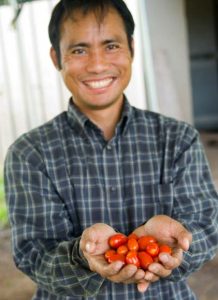 The association operates Big River Farms (BRF), a 160 member CSA sourcing predominantly from their farmers-in-training. After their first year of training, farmers are told pre-season how much the CSA will purchase– between $35,000 and $40,000 in produce each year, or about $5,000 per farmer. In addition, the association has eight wholesale accounts to which its training farmers sell an additional $15,000 each year. Through a three-year course of classroom time and field experience, farmer students from Burma, Somalia, Kenya, Ethiopia, and Guatemala learn greenhouse skills, how to read seed catalogs, make invoices, and keep field records.  In the inaugural year of 2009, ten farms participated the program, each farm composed of two to six family members.

Since beginning the course, all ten farms currently sell in two or more markets, and eight have moved on to start their own farm businesses. Six farms now operate their own small subscription programs, helping them avoid bank loans in the beginning of the season. As Hill says, “CSA members provide a lot more moral support than the banks do!”

The learning curve is steep at MFA. First-year farmers start on a quarter of an acre and by their second year in the program, they are usually grossing between $8,000-$12,000 per acre.  Hill estimates that by the end of the three-year program, the most successful farmers are grossing as much as $30,000 in fresh produce sales by selling through the BRF CSA, their own CSAs, farmers markets, restaurants, and co-ops. “The farmers’ families and neighbors also enjoy the bounty. The return on investment is huge.” 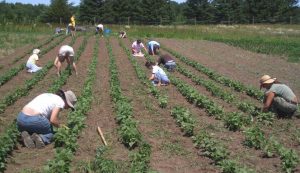 Supported by its FMPP grant, the Minnesota Food Association taught its participating farmers the importance of diversified marketing outlets, helping each trainee develop a realistic and customized business plan. Four graduates are now selling at farmers markets in addition to other outlets, but others chose to focus on selling to restaurants, or senior nursing homes, or other small institutions. Six graduates and two current trainees are now working with distributors, a testament to the program’s success in helping farmers have a consistent, high quality product line.

As a result of the grant-supported trainings, Hill says that the new farmers now “know post-harvest handling, grading, bunching, packaging, cooling, presentation. They know how to present harvest estimates, receive purchase orders, create invoices, and record payments. They know and practice food safety. They are all Certified Organic.”  He takes pride in helping farmers build their own reliable direct markets.

Being the only Certified Organic immigrant producers in Minnesota isn’t easy, though, and it’s made possible with hard work and many lessons about record-keeping, organization, and organic production practices. FMPP support for something as simple as what they call the “farmer resource desk,” (a photocopier, printer, computer, and telephone access) has removed the infrastructure barriers typically faced by beginning farmers, especially those seeking organic certification. 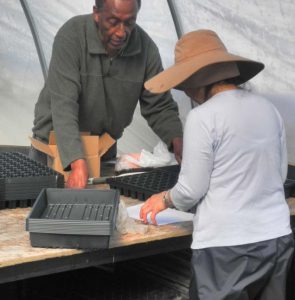 May Lee, a Hmong American greenhouse operator, mentors a first year farmer from Ethiopia in preparing his first transplant trays for his fields later this season.

Now in the third three-year cycle of training courses, the association’s refugee farmer training program continues to grow, allowing the organization to hire their own graduates. May Lee, a Hmong American farmer, started in the training program in 2007, and is now a paid Farmer Mentor leading greenhouse training sessions on propagation and management. She operates her own greenhouse, propagates all her own seedlings, and is the only Hmong American in Minnesota selling her own Certified Organic seedlings. May also operates the first and only Hmong American owned CSA farm in the state.  According to Glen, the value of Lee teaching and working alongside new farmers as they start their first seedlings as farmers in America is “priceless.” These newly hired graduates are peer role models, teaching the lessons they learned to help new farmers avoid beginning inefficiencies and grow with confidence.