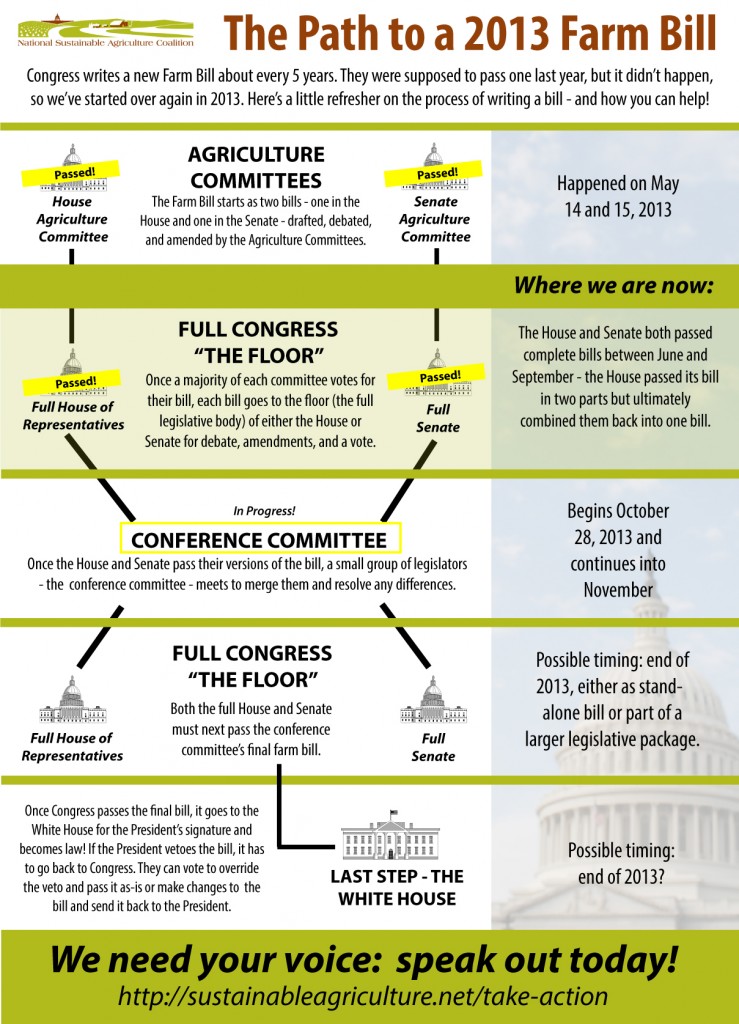 The Senate and House have moved their respective farm bills into conference, meaning that they’ve selected conference committee members and will begin the work of reconciling the major differences between the two versions. FMC has submitted a letter to the committee, stating the priorities of farmers markets and direct marketing farmers, and encouraging conferees to act on all the positions presented by the National Sustainable Agriculture Coalition.

Are you in a state represented by a conference committee member? If so, make sure to contact his or her office and voice your concern for farmers markets and sustainable agriculture. Feel free to use FMC’s letter as a guide! You can find the contact info for your legislators at www.senate.gov, and www.house.gov. The committee members are:

Farmers Market Coalition (FMC) applauds you for moving the 2013 Farm Bill into conference. Our nation’s farmers have been without a proper bill for too long.

FMC is a 501(c)(3) nonprofit dedicated to strengthening farmers markets across the United States for the benefit of farmers, consumers, and communities. FMC’s member markets, organizations, and farmers are eager for you to pass a comprehensive, five-year food and farm bill that will allow them to continue bringing fresh, local produce to their communities. On behalf of our nearly 700 members representing 4,400 farmers markets, we urge you to pass the 2013 Farm Bill, including measures that support the growth of sustainable farming and local food systems.

Increase direct farm bill funding for the Farmers Market and Local Food Promotion Program to at least $30 million per year, with a ten percent cap on administrative expenses. The number of farmers markets has increased rapidly in recent years, and many are young and volunteer heavy organizations. In order to maximize the impact that markets are having on local economies and community health, their organizers require training and technical support. Markets without paid managers, for example, sell an average of $11,059 per month. Markets with paid managers generate more than five times that amount in sales—sales that serve to incubate new farm businesses, sustain family farmers, keep the land in agriculture, and ensure access to fresh, nutritious food.

For seven years, the Farmers Market Promotion Program (FMPP) has helped provide training and job creation, increase access to healthy foods, strengthen regional food systems, fuel rural and urban job creation, and build the capacity of small and medium-sized farms. One year of FMPP funding has been shown to have lasting effects on farmers markets and their communities. Wendell Verrett of Lafayette Louisiana has shared the Twin Parish Port District’s experience with the program, saying, “FMPP provides startup funds that cannot be easily acquired through other funding sources, and permitted us to secure additional funding and leverage a second farmers market site in two neighboring communities.” Farmers markets in each state have similar success stories to share.

Both the House and Senate versions of the 2013 Farm Bill expand FMPP into the Farmers Market and Local Food Promotion Program (FMLFPP), opening up the funding opportunity to food hubs, Community Supported Agriculture, and other innovative local food initiatives. This highly competitive program is a small piece of the farm bill that provides critical support for America’s many burgeoning local food initiatives. Please ensure its continued success by funding FMLFPP at $30 million per year, and including a 10% cap on administrative expenses.

Maintain the Senior Farmers Market Promotion Program in its current form as a separate program (as presented in the Senate version of the farm bill). In 2011, SFMNP provided much needed fresh fruits and vegetables to more than 863,000 low-income seniors in 42 states, 7 tribal nations, the District of Columbia, and Puerto Rico. The program offers triple benefits: a reliable source of income for smaller-scale produce farmers who otherwise receive little to no federal support; an increase in the consumption of fresh, nutritious, locally grown fruits and vegetables among nutritionally at-risk senior citizens; and an aid in the development and expansion of farmers markets, roadside stands, and community supported agriculture programs. Expanding SFMNP to include WIC participants without increasing the program’s funding will reduce the amount of fresh food available to seniors.

The SFMNP is a very small piece of the federal budget, yet it has a significant impact on the health of our nation’s at-risk senior population and our community farmers. As you consider the 2013 Farm Bill, please support SFMNP by restricting its use to seniors.

Adopt the Senate version of the Hunger Free Communities Incentives Grants Program, providing for mandatory funding levels of $15 million in FY 2013, $20 million in FY 14 – 16, and $25 million in FY 17 for SNAP incentives at farmers markets. SNAP redemptions at farmers markets increased nearly 400% since 2009, reaching $16.6 million in 2012. More SNAP recipients are including the farmers market in their weekly shopping routines, and seeing health benefits as a result. The dramatic increase in redemptions can be attributed to innovative education and programming efforts like SNAP incentives. SNAP incentives have gained bipartisan support, due to the win-win nature of the program—consumers increase their consumption of fresh fruits and vegetables, and farmers enjoy increased revenues.

FMC is also in favor of measures within the farm bill that encourage the growth of community scale, sustainable farming. Local and regional agriculture is a major driver in the farm economy. Public investments in training, technical assistance, and microcredit for rural entrepreneurs enable small business development and revitalize rural areas. As a member of the National Sustainable Agriculture Coalition (NSAC), FMC supports the positions of NSAC as outlined in its letter to conferees sent on October 22nd.

Thank you for your attention to these important matters, and for your work to ensure that America’s farms and local food initiatives are able to grow and thrive.