Nervous and bleary-eyed from two consecutive late nights baking, labeling, and scrambling to generate last minute signage, I found a parking space, chased down someone on market staff, and began unloading my boxes. I forgot to write down the space number I had been assigned: E42? F24? Something like that. I have no tent, and share one with another small start-up vendor. Holy expletive. I am actually doing this.

I had shopped at this market weekly for four years, even served on the city’s steering committee to help advise its redevelopment, where I’m sure I sounded like a very nagging broken record in my insistence that bigger (i.e. more vendors) is not always better. I would then creep out of each meeting early when my baby’s antsy cries became too distracting for the group, which I am sure compromised my professional credibility. And here I was now, taking full personal advantage of the same very accessible vendor application process which allows people like me, who make “unique enough” products to fill in when space is available. 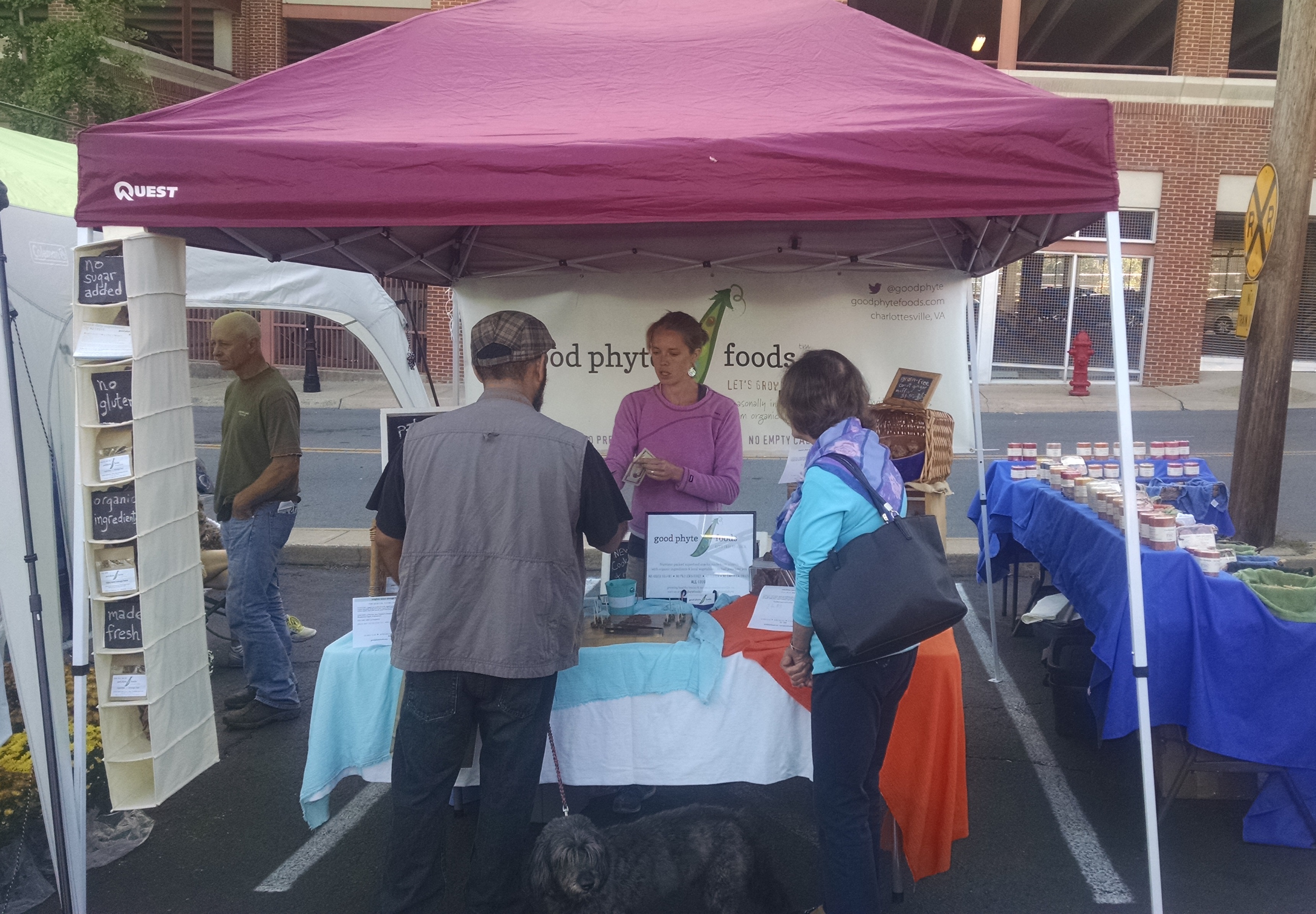 Two years after having the initial spark of inspiration for this new business (good phyte foods), I was finally, finally actually selling something. The thrill of taking even this most humble step nearly made me tremble, after having crept toward the dream at a pace that seemed like Venus rotating on its axis (apparently something like 243 Earth years). When I applied as a back-up vendor in May, I was expecting a little bit of a wait, which would allow me to perfect the recipes and packaging and make an appropriate “launch.” Instead, I got an email less than two weeks later with my space assignment. I had three days to get my act together.

My first day as a vendor lent a new lens, like someone who sees the backstage of a playhouse for the first time. The infrastructure in the more creative displays (drapes, shelving), the produce backstock crated on the beds of pickups, the markings on the asphalt– all this suddenly became visible. At 6 am when I pulled up, some of the farmers had already been there setting up for 30 minutes, with the sun still low in the sky. By then, it was light out, but many still used bright headlamps to stock their rainbowed displays of vegetables. They took breaks in set-up to get coffee (at which point they started smiling in earnest). The lot would soon be crowded with shoppers, families, and strollers. Fifteen years after I first fell in love with farmers markets (selling for Even’ Star Organic Farm in Southern Maryland), I was back under the pop-up tent. 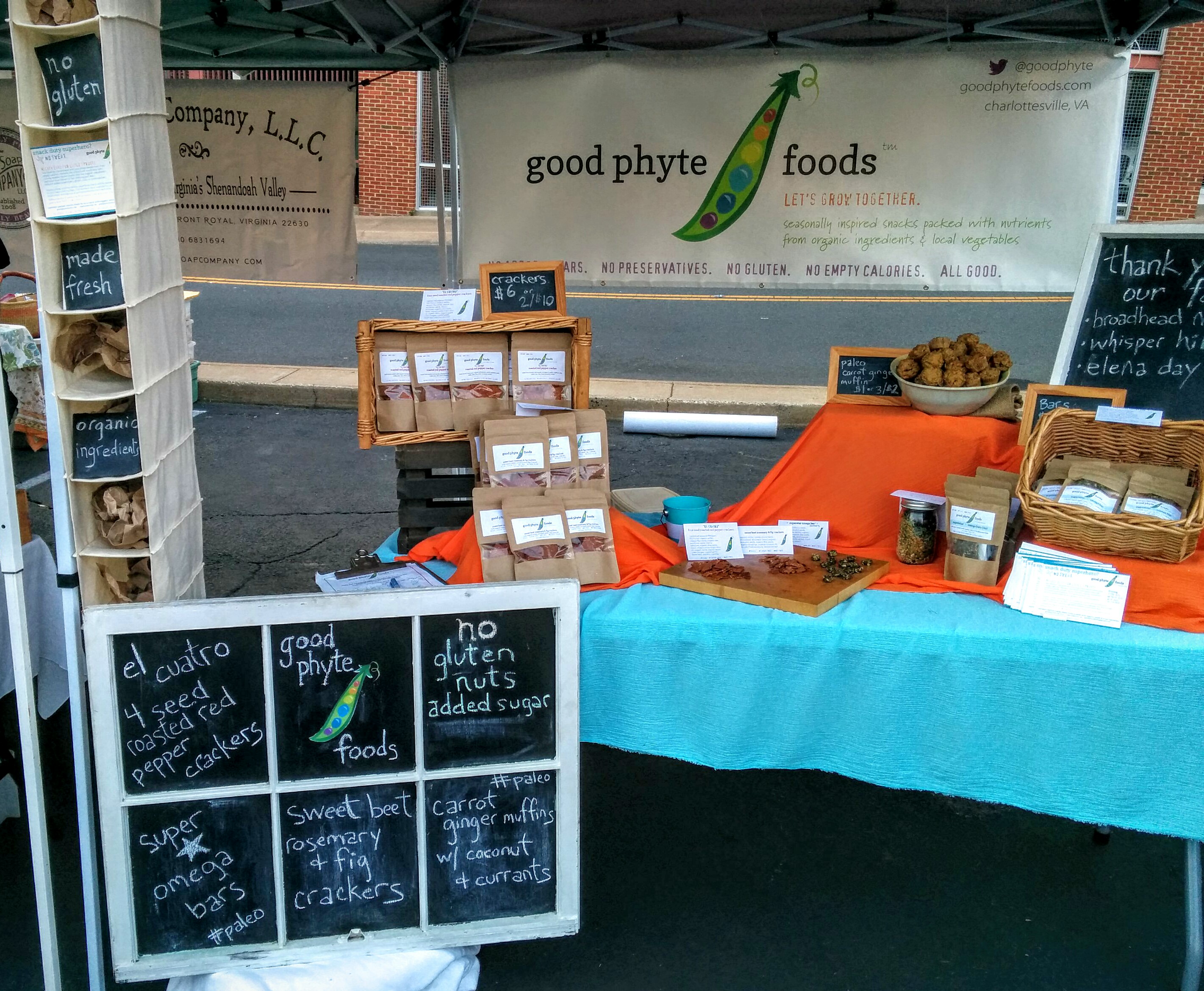 That first market day was three months ago. Now, deep into a hot summer, that crisp new lens is blurred slightly by sweat and cynicism. I have the tent, table, banner, and a slightly more organized display that might be classified as “sloppy chic,” which involves repurposed household items like a canvas hanging shoe rack and baskets for  holding magazines. Since my products (crackers, muffins, and nutrition bars that combine organic seeds with seasonally available local vegetables) often require a bit of explaining, I have honed a schpiel which, as earnest as it is, sounds grating to my own ears by now. But being a non-reserved vendor means that I am in a different place each time, which facilitates mingling with other food entrepreneurs even if it’s frustrating for my loyal customers. Sometimes I’m right next to the local coffee roaster (indulgent!), the taciturn furniture maker, the salmon guy, the pastured livestock farmer who seems to always forget to pack food and is willing to barter sausage for my snacks, etc.

Other times, my placement is like an exercise in irony: most recently, I found myself unloading my chalkboard with a hand-written tagline “say goodbye to sugar crashes” right next to the grandfatherly kettle corn vendor, simultaneously stacking four bright yellow 25 pound sacks of Domino sugar under his skirted table. He generously offered me the first warm paper bag from the first batch, which I politely declined over the rumble of my pre-breakfast stomach. Not having spent six hours next to an oversized popcorn kettle before, my lungs were unaccustomed to the smoke generated by the soybean oil. After a while, every conversation with a potential customer was punctuated with my lengthy and repetitive coughing fits. The manager (understandably) did not seem particularly sympathetic when I “casually” referenced the cause of this affliction as I (still coughing) turned in my sales report at the end of the morning. How funny, I thought, that I was “choked up,” by kettle corn– the posterchild for “carnivalesque”  products that producer-only farmers markets feel detracts from the agricultural emphasis. How many times, in my tenure at FMC, had I heard references (sometimes from my own mouth) to “kettle corn” as a shorthand for inauthenticity? But darn if the stuff isn’t delicious.

Each week is a racing treadmill of preparation that only a small percentage of shoppers, however supportive, seem to appreciate. One of my recent neighboring vendors said she conducted a brief poll of other vendors to find that the average amount of sleep the night before was three hours. At all times, there are little sticky notes adhering tenuously to my grey matter as mental notes to self: Get quotes and order toddler t-shirts. Find new labels with the right size: can I get a better price? Finish kitchen inspection application. Find the number for the guy from the co-op that spoke at the conference and call him on Monday. Request wholesale pricing list from seed distributor. All of these things are nagging mid-range tasks that a week of baking, bagging, and labeling for market doesn’t allow for. So in those quiet lulls in traffic, when the brief pause in engagement allows you to feel your exhaustion and you still stand there trying to smile invitingly out at the world beyond your tent, your brain is really itching with to-lists and pleas that this week’s sales will allow you to pay the credt card bill you racked up buying in ingredients in bulk.

From the perch under the pop-up, your observational skills become keen, like a novelist creating character sketches from the people they see at airports.

The tired toddlers sweaty and sunscreened in their strollers, squealing and swatting away the extended hand (holding a sample) from a dad who misdiagnoses dehydration as hunger. Once they’ve gotten some water in their system, stop screaming, and try a bite, they will be back to buy.
The fashionable college girls in uncomfortable shoes and clear plastic cups of creamy iced coffee (which is, incidentally, the only thing they buy at market).
The morning joggers and gym rats with sweat-sheened hair who seem thirsty and hungry but cashless.
The woman in her 50s moving slowly past and noticing my signage referenced local vegetables, seeming to think about it for minute before turning around and asking, very seriously, “Do you make kale donuts?” 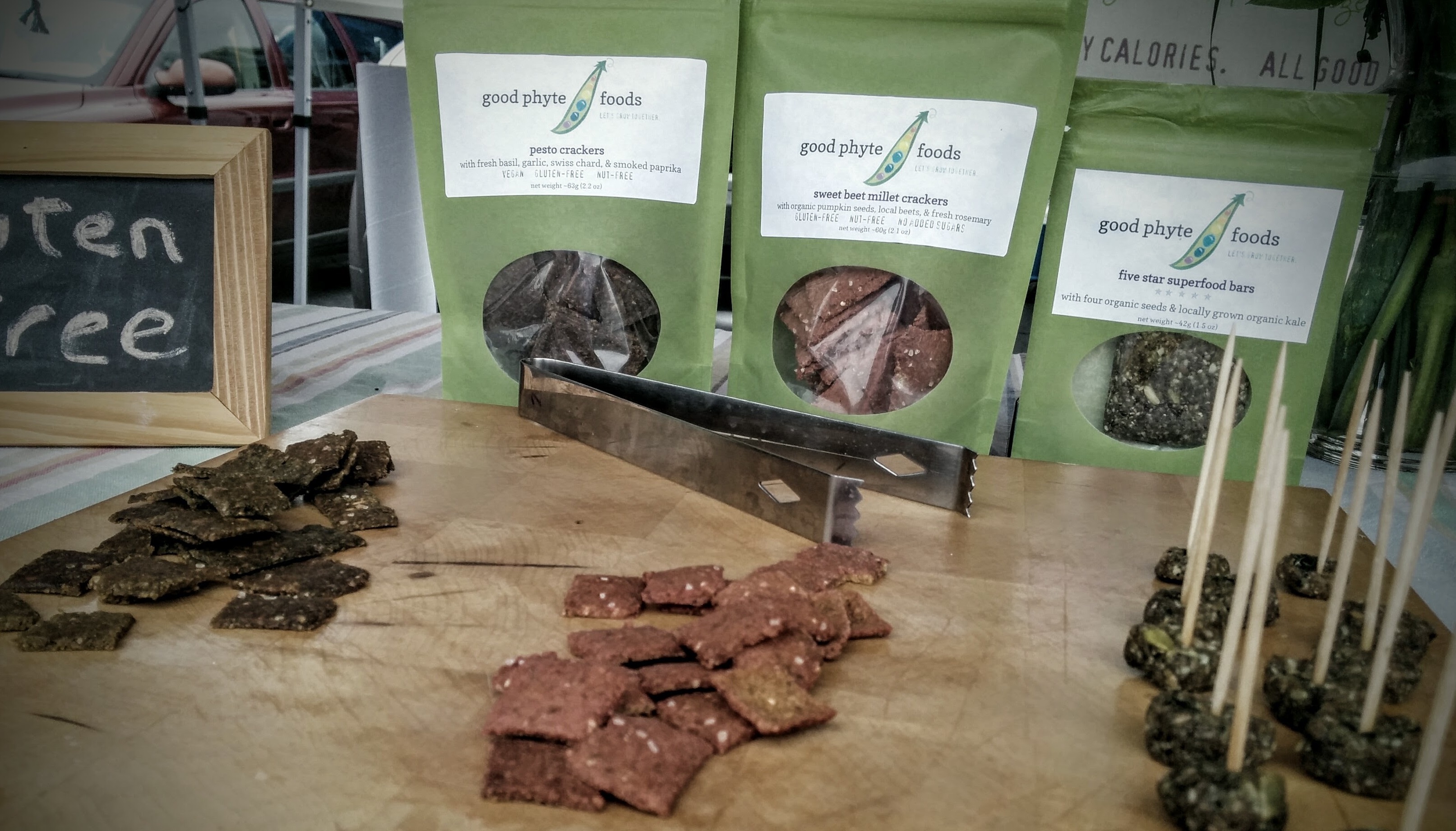 As anyone who has ever offered samples as part of their business has surely observed, there are a significant number of hungry grazers who have no real interest in your product at all and yet will gladly eat your food and contort their faces into something approximating contemplation before they say “that’s incredible,” and move on. For the record, I am no longer one of these people.

Here is where this cheerful cynicism has yet to penetrate the purity of joy I feel every Saturday: relationships that emerge in the community of vendors through bartering. Elena offering me small garbage bags of kale leaves made holey by harlequin beetles for dehydrating, apologizing repetitively for their ugliness. Vicki the potter who (gasp!) actually deems my crackers worthy a trade for her gorgeous ceramics. The slick-salesman Scottish shortbread baker who, having just met me, expertly expounding on the quality of my grain-free snacks to passerby as I was scooting off for a port-a-potty break. When the day is rainy and sales lower than I hoped, I would go home dejected were it not for the abundance of bartered produce and the memory of conversations that remind me how much more hardworking and creative these people are than I am. No one complains because they know they are blessed with this utmost human privilege– to work way too many hours and earn way too little in the pursuit of what fulfills you, most of us lucky enough to be well fed, if nothing else. These are the colleagues and coworkers whose shared goods and inspiration will make or break any vendor’s market experience. When it comes to sharing, I have learned not to wait until market is over to “get rid” of leftovers as everyone is packing up to go home. While my stand remains incompletely set -up, I abandon it to scurry around and pay it forward with bags of whatever I’ve made that week. Mostly, they go to the farmers whose vegetables I use as ingredients, but also to the other entrepreneurs with whom I have become friends. Later, I will find eggplant, kale, carrots, flowers, hot sauce, kombucha, tofu–you name it– on my table after I return with my car. “Bartering is best,” should make it onto a T-shirt one of these days– a slogan only a market vendor might appreciate.

Visit Stacy’s site, good phyte foods. We hope that she expands into mail order in the near future!