Farmers Market at Camp Lejeune off to a Fast Start: Over 1,000 Marine Families attend Grand Opening

by Gus Schumacher, vice-president Wholesome Wave, FMC Board of Directors 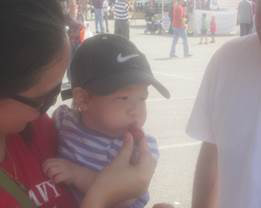 Just-picked fresh strawberries from North Carolina’s Putnam Farm and the Aman Family Farm quickly sold out at North Carolina’s newest farmers market at Marine Corps Base Camp Lejeune. Nearly 1,000 service members and their families stopped by after Commanding General BGen. Robert Castellvi cut the ribbon to mark the official Grand Opening on April 29th.  Aman Farms’ strawberries sold out so fast that by noon, proprietors had to call back to the farm for an additional delivery of dozens of flats. 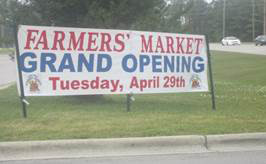 Located in the parking lot of the Marine Corps Exchange, General Castellvi said his Government and External Affairs team worked nearly 18 months to bring the market to fruition based on growing interest from the base population. Throughout the buildup, they worked closely with the North Carolina Department of Agriculture representative Freda Butner and Onslow County Extension Officer Larry Kent to locate the farmers and get the permits necessary for this on-base market. 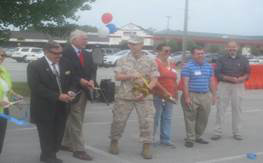 Key to driving on-base interest in the market, according to Butner and Kent, was to enable enlisted Marine families to use their WIC Farmers Market Nutrition Program vouchers there. North Carolina receives about $226,900 annually in WIC FMNP vouchers.  Onslow County vouchers are now issued early so that families on WIC can exchange them for the superb varieties of fresh berries available early in Eastern North Carolina. From the rapid sales, Marine families couldn’t wait and farmers said they would be bringing more berries in ensuing weeks. 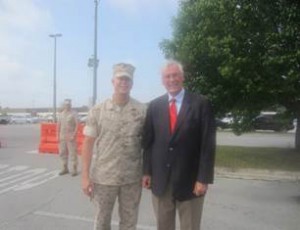 Farmers Markets on military installations are growing, fostered by the Pentagon’s Healthy Base Initiative.  Ft Belvoir, Falls Church DHHQ and Quantico Marine Base in Virginia were initial pilots in 2013. Maryland’s Ft Meade is scheduled to open in late May, 2014. Camp Lejeune families , while not part of the pilot HBI, encouraged the Commanding General and his staff to link with local and state officials and start this market. Freda Butner and Larry Kent said as more produce ripens, there are likely to be more than 40 farmers and vendors at the market by mid-June, making this market the largest on a military installation in the country. 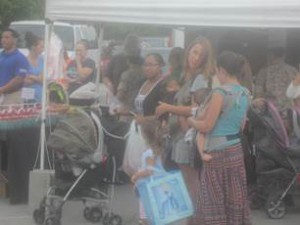 Marines and their families line up for strawberries.