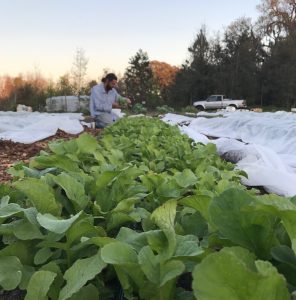 On Thursday September 7th, Georgia Governor Nathan Deal expanded the state of emergency to include 30 Georgia counties, and ordered a mandatory evacuation for areas east of 1-95. For Savannah farmer and resident Chris Molander, the issued evacuation was a blow itself.

“The mandatory evacuation notice (which was issued on Thursday and revoked by Saturday morning prior to the hurricane’s arrival the following Monday) guaranteed that the hurricane would do some serious damage to my farm, as it caused our farmers’ market to be cancelled, and also all of my regular Saturday restaurant deliveries,” Chris explains. “I had already lost half a week preparing for the possibility of a storm, and then I lost the majority of my week’s income before the storm even hit.”

Chris has been farming on and off for 8 years in California and South Carolina, but has made Savannah and his Vertu Farm home since February, 2016. He started farming full-time this January, and is still building the farm up and establishing infrastructure.The impending storm and Vertu Farm, its middle English spelling straight from The Canterbury Tales’ prologue, weighed heavy on Chris’s mind as he prepared for the worst.

Chris’ go-to evacuation destination was Augusta, Georgia, where he has friends and also a contact in Kim Hines, Augusta Locally Grown’s Director. He reached out to Kim to see if he could bring some of his crops with him and participate in the market.  ALG’s Tuesday market was also effectively canceled, but Kim put Chris in touch with two local area chefs, Megan Alig of Creative Cuisine LLC and Eric Draper, Head Chef at Fuse Restaurant.

Chef Megan recently converted a small church into a commercial kitchen where she runs her Creative Cuisine business, providing farm to table catering and private chef services. Chef Eric has been professionally cooking since 1992, with culinary experiences in California, Michigan, Colorado, Seattle, Alaska, and Mexico. At Fuse, the concept is drawn around the relationship between good food and good drink.

“Eric and Megan both contacted me and committed to buying some things, and Megan gave me a few leads on some other restaurants that might be interested,” says Chris. “Their commitment enabled me to make the trek up to Augusta and take a gamble on being able to sell the other stuff while I was there. Fortunately, a few of the other chefs Megan had mentioned decided to buy as well when they saw my stuff. I wasn’t able to sell all of it, but at least I didn’t lose my whole week’s crop and all its income. I’m extremely grateful for Kim, Eric, and Megan, and I enjoyed experiencing a different market from what I am used to down here. They really did me a huge favor in committing to buy produce they hadn’t seen from a vendor they didn’t know anything about. I hope that they enjoyed using my food as much as I was pleased to provide them with it!”

Both Chef Megan and Chef Eric regularly source fresh, local produce to produce tasty plates and please hungry customers, and the chefs were happy to do business with the Savannah based farmer. Chef Eric purchased micro watercress, Thai basil, and and sunflower sprouts from Chris.

“I purchased jalapenos and guajillo peppers from Chris,” says Chef Megan. “He also threw in sunflower sprouts which I’d never seen before. I used them in the salads on a set of a TV show I’m working for. They loved them.”

Thankfully, Vertu Farm’s land was not significantly impacted by Irma.

“As it turned out, the hurricane didn’t come here and fortunately we had very little damage from the storm itself, which was a huge blessing for me. Other farmers at our market weren’t so lucky. I have good drainage and few old trees on my piece of land. People who don’t have their land properly graded or proper drainage installed can face potentially catastrophic losses when a deluge hits. Sandy soil purports to drain very well, but if the sandy soil fills up from the hard subsoil beneath all the way to the root zone, plants will drown. This can happen in a particularly wet season here, or with huge rains.”

Chris acknowledges how everyone is impacted when a hurricane comes through, and feels very fortunate that he and his business experienced as little physical and financial damages as it did. He feels a part of his relief is owed to Kim, Chef Megan, and Chef Eric. It is inspiring to hear that even in the wake of a great force like Irma, farmers market connections can act as buoys and spread a base of community.

Chef Eric has a few parting words for Irma.  “I think although Irma was a monster, farmers are a rather resilient breed of human.  I think they’ll roll with the punches and be back to the growing in no time.”