By Gus Schumacher, Founding Board Chair of Wholesome Wave and Former Massachusetts Commissioner of Food and Agriculture

Note: A week before his passing, Gus Schumacher penned this article, describing the runaway success of a program that was near and dear to his heart—the Healthy Incentive Program in his home state of Massachusetts. Never one to do things by half measures, Gus also created his own Youtube Channel to share short videos documenting the program’s success and what it meant for the farmers of the state he loved so much.

Massachusetts vegetable farmer David Paysnick’s revenue is up 66% this year, due in large part to the increase of SNAP families who frequent his stand at two area farmers markets. The increase in demand is attributed to the Commonwealth’s Healthy Incentive Program (HIP). HIP is a statewide nutrition incentive program that doubles the purchasing power of SNAP (Supplemental Nutrition Assistance Program, formerly food stamps) recipients when they buy fresh, canned, dried or frozen fruits and vegetables at participating farmers markets, farm stands and through community supported agriculture (CSA) programs. Massachusetts SNAP recipients receive an instant, dollar-for-dollar match credited to their EBT card when they buy local produce. To meet the growing demand, Paysnick is looking to acquire additional farmland and invest in more hoop houses, which will allow his farm to grow fresh produce longer into the season.

Dracut’s Dave Dumersq is equally pleased with the new SNAP HIP program, with families shopping regularly at his roadside stand and the dozen farmers markets where he sells.  Dumersq says these “new SNAP customers fill baskets of his just picked fruits and vegetables, returning regularly to often spend $40.” 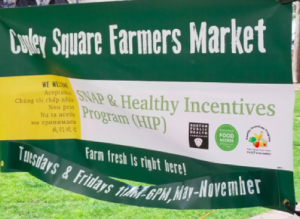 Copley Farmers Market in Boston has emerged as one of the state’s premier HIP markets. According to Jeff Cole, Executive Director of the Federation of Massachusetts Farmers Markets, the market now welcomes 300 or more new shoppers each market day from neighborhoods across Boston. Several farmers are now hiring multilingual employees to better serve the surge of new customers who have become regular shoppers at the market thanks to HIP.

According to HIP Incentive Director Frank Nocito, the value of SNAP incentives redeemed at Bay State farmers markets surpassed $1.2 million in mid-September and total SNAP spending at markets has nearly tripled. In August alone, SNAP shoppers spent $600,000 directly with the state’s farmers. Nocito and his colleagues at the Department of Transitional Assistance (DTA) report that the program is set to realize its three-year goal in just one year. With fall and winter markets still to come, Nocito anticipates the program will reach $1.5 million in redemptions by the end of the year. This rapid growth has been realized in large part because of the convenience that HIP affords participants. Today, incentives can be earned at 400 HIP retail locations with  200 farms participating at these multiple sites.

HIP’s rollout was not without logistical challenges; providing markets and roadside stands with the wireless equipment necessary to securely process SNAP transactions was no small feat. The state made use of the SNAP EBT Equipment Program offered by the USDA Food and Nutrition Service in partnership with the Farmers Market Coalition (FMC) to provide 137 farmers and 21 farmers markets with the HIP-accessible payment system, MarketLink. The state worked closely with MarketLink and the SNAP processor, Conduent, to develop a streamlined payment system for HIP participating farmers and markets, that doesn’t require tokens, coupons, or loyalty cards. The incentive funds are automatically credited to the SNAP recipients’ EBT card at the time of purchase. 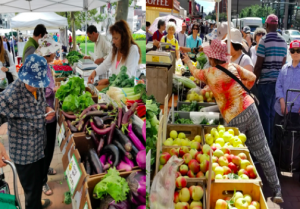 Cole and Nocito also emphasize the importance of publicizing the program and point to letters sent to 400,000 SNAP Households describing the program as a critical element in HIP’s success. Each mailer provided information on how to locate participating markets along with a link to a website that the state created with maps and hours of operations for participating outlets. Ed and Betty Osman of E & T Farm in Barnstable said the state’s website helped dozens of SNAP families find their rural farm and become weekly customers. With steady demand, the Osmans are considering expanding operations for winter hydroponic vegetables, especially their highly sought after fresh lettuce.

Tim Friary, also farming nearby in Barnstable at Cape Cod Organics and selling at the Orleans Farmers Market, said once his MarketLink equipment was up and running, he started seeing some 25 SNAP shoppers weekly at his Barnstable farm and at his farmers market stand in Orleans.

The ability of SNAP incentive programs like HIP to simultaneously nourish low-income shoppers while putting food assistance dollars directly in the pockets of the Commonwealth’s  farmers has earned HIP the support of Bay State elected officials including state Senator Julian Cyr and state Representative Sarah Peake, who recently saw the program in action at the Truro Ag Fair and Farmers Market. Both Peake and Cyr will be working with legislative leaders, including Senate President Stan Rosenberg, to further increase the Commonwealth’s funding of the program from $1.35 million to $2 million. These funds will be matched by the federal Food Insecurity Nutrition Incentive (FINI) program, which was created by Congress in 2014 to support SNAP incentive programs.