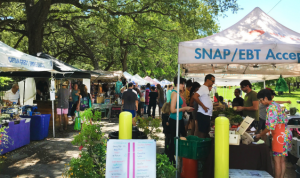 Since its inception, FMC has prioritized advocating for support for SNAP EBT equipment and administrative funding to increase SNAP access at farmers markets. In 2012, the USDA Food and Nutrition Service (FNS) first began offering support using $4 million in funds from the President’s annual budget for the agency. Now, seven years later, a variety of avenues have been pursued and tested, with significant gains made: the share of SNAP dollars spent at farmers markets continues to rise, even as total SNAP dollars spent decreases across the country.

However, farmers markets will not be able to reach their full potential as fresh food access points for our low-income shoppers until markets have long-term access to no-cost, reliable, wireless SNAP processing systems at farmers markets.

July of 2018 highlighted the tenuous situation of equipment access at farmers markets, when one of the major equipment providers, Novo Dia Group, announced that they would be shutting down by the end of that month. Immediately after the announcement in July, FMC set up an information center where markets could find updates on the situation and information on alternative equipment options, and launched a mini-grant program to help out markets in dire need.

While temporary relief was found, farmers markets once again face uncertainty with regard to SNAP on a number of fronts. Although provisions were made to extend Novo Dia’s service through February 2019, the company has not provided clarity regarding their future. In responding to FMC’s request for additional information, Novo Dia representatives responded by saying “NDG never stated that a shutdown would occur at the end of February 2019,” and that future updates would be posted on their website.

Additionally, the unprecedented, partial government shutdown has further complicated the SNAP picture for farmers markets in the following ways:

In the meantime, FMC will continue its work to provide stability for markets offering SNAP. Throughout 2019, FMC will also continue to coordinate with markets, network leaders, elected officials and the USDA to compile and share information, assess the problem, and identify paths of action to help markets avoid a disruption in SNAP services.

Additionally, FMC will step up efforts to support the inclusion of free wireless EBT equipment for markets in state SNAP contracts through collaboration with state partners and policy leaders. We believe that such an approach is needed in order to ensure a long term solution that protects markets from the uncertainty they face today.