While wildfires are a natural occurrence, over the past decade we have witnessed years of record breaking recurring wildfires throughout the US, with 2020 being a particular devastating year for communities throughout California, Oregon, Washington, Colorado and neighboring states. News coverage of the millions of acres burned is fading, but the effects of disasters of this scale will continue to be measured and felt for months and years to come. The impacts on human physical and mental health when living in an evacuation zone are difficult to describe—the constant anxiety for days, the difficulty breathing, the devastation watching beloved places burn and close friends lose everything. 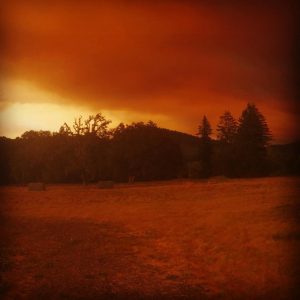 At Farmers Market Coalition we are particularly occupied by the needs and impacts of wildfires on farmers, farmers markets, and regional food systems. In Oregon, even farms that didn’t lose their farmland to wildfire have been affected by evacuation orders and problems with crops after being away from their farms for weeks in the peak of the season. This is on top of a food system already stretched thin by upheaval due to the COVID-19 pandemic. The stress of evacuation and emotional turmoil of leaving the farm is hard to measure, but the loss in farm revenue is expected to be quite large. Only time will tell what the full long-term effects of these fires will be on our local and regional food systems.

While farmers markets are affected by natural disasters in their communities, they can also add to the strength of recovery. Farmers markets have helped build resilience for their communities in the face of natural disasters through thoughtful adaptation, flexible structures, and the deep generosity of connected community members. These adaptations have included market operators who waived cancellation fees for farmers affected by the fires, modified hours to limit time breathing in toxic smoke and provided additional PPE for protection against the harmful microscopic particles in wildfire smoke. Farmers markets offer a flexible marketplace in the midst of crises. Instead of requiring certain quantities, farmers markets allow farmers to sell what they have, when they want it; an important freedom for farmers scheduling in harvests around evacuations. While some farmers markets have a designated physical structure, most markets are able to remain flexible with their physical location and serve as a moveable source of fresh food for communities affected by fires and other natural disasters. 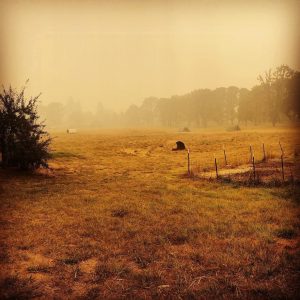 The generous spirit of connected communities has really shown us the power of networks and the importance of community based food systems. In Oregon farmers have stepped up to help community members by donating fresh food to evacuees. Community members have stepped up with masses of volunteers at once to help farmers with harvesting or cleaning up damage at farms, calling themselves “Crop Mobs.” Farmers continue to help other farmers directly however they can, such as opening pasture land and caring for evacuated livestock through regional Facebook groups.

We believe that farmers markets have contributed to the strong community ties between farmers, consumers, small business owners, and between fellow farmers. Farmers markets and other farm-direct purchasing options provide a networking space for all members of the community food system from producers to consumers. Interfacing face-to-face (even with masks!) rather than through contracts behind the scene of large grocery stores creates a network built around the food system that makes communities more resilient to natural disasters. Without customers connecting with producers, would they be willing to step up for their local system in the same ways? Without farmers knowing the people who eat their food would they be willing to help the community in the way they have? Farmers markets are one place where all these food system participants can come together and build stronger relationships that create a more resilient food system.

When food supply chains get cut short, the importance of resilient local food systems comes up again and again. FMC GusNIP Project Manager Rachael Ward is based in Eugene, Oregon and spoke first-hand about the power of networks in the area:

Honestly the bright spot in these wildfires has been watching the amazing way that community food systems provide support and resources for those who need them. Numerous farmers in our area have opened up pasture and are providing transportation for livestock in evacuation zones. They are putting themselves in harms way to go into evacuation areas to rescue livelihoods. Their resiliency through a pandemic and now natural disasters is awe inspiring. It really speaks to the importance and power of networks.” 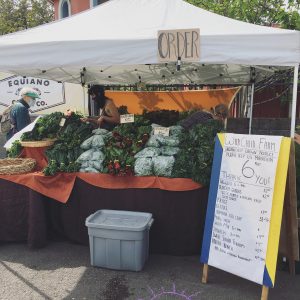 A customer and vendor chat at the Whiteaker Community Market in Eugene, Oregon.

Fires continue to rage in parts of the west and storms make their way across the east, with future effects of climate change on the horizon for all of us. Farmers Market Coalition is an organization, but we are people first, who deeply care for the land, the people, and the communities affected by the devastation of the past year. The scale of the damage is nearly impossible to measure and the aftereffects will be felt for years to come, but the strength of the community-based networks that we have seen in action keep us optimistic for a better future.

Looking for disaster preparedness, mitigation and recovery resources? You can find them on our Disaster Resources for Markets and Farmers page.