On Sunday, August 3, the Farmers Market Coalition kicked-off National Farmers Market Week by revealing and displaying the winners of our 2014 Poster Contest at the Dupont Circle FRESHFARM Market. One-hundred and sixty- four posters were entered into the national contest, showcasing the amazing work of farmers markets across the country, and creating a significant challenge for the judges who had to choose from the abundance of creative, beautiful, and often humorous submissions. The Union of Concerned Scientists was onsite to co-host the event and to release their new factsheet on innovative and important partnerships emerging between farmers markets and hospitals. The factsheet, titled, ‘Hospitals and Healthy Food,’ was created in partnership with the Johns Hopkins Center for a Livable Future.

Bernadine Prince, FMC President and Co-Executive Director of FRESHFARM Markets in DC announced the winners of the poster contest, saying, “Market posters are not only promoting a place to stop and get delicious, fresh food, they’re promoting the opportunity to support the economic viability of your local farms and preserve productive farmland.” The Hudson Farmers Market in Hudson Ohio took home First Place, and a $1,000 prize for their poster depicting a bounty of local goods heading to market in the back of a well-worn truck. The artwork was created by Andy Tarray—marking his fifth year as Hudson’s poster designer—and was submitted by the Hudson Farmers Market’s Board President, Michelle Lazor.

Just Harvest in Pittsburgh, Pennsylvania took home the $1,000 prize for Best EBT / Incentive Program Poster, clearly showcasing their ‘Fresh Access’ program and a list of eleven farmers markets in the Pittsburgh area that accept federal nutrition benefits, as well as credit and debit cards. Wholesome Wave partnered with FMC to sponsor this category, bringing attention to the increasing number of farmers markets offering the opportunity to spend SNAP benefits on fresh, local produce. Incentivizing SNAP spending at farmers markets is one way that many communities are beginning to address the inequities in the nation’s food system, which make it especially challenging for low-income Americans to maintain a healthy diet.

Webster Groves Farmers Market in St. Louis, Missouri, and Forest Grove Farmers Market in Forest Grove, Oregon tied for second-place, each packing plenty of important market information into beautiful, eye-catching posters in very different styles. Marcella Kriebel, the artist behind the vibrant Forest Grove poster, was inspired by the diverse offerings and sense of community she saw at the market. Kribel shared that the market “nourishes people in more ways than one: it provides healthy, delicious food, but also brings people together—people of all walks of life.” The final prize went to Knoxville Tennessee’ s Market Square Farmers Market, which  took home Fan Favorite, by generating 803 ‘likes’ on Facebook.

All of the entries can be viewed on FMC’s Facebook page at bit.ly/2014PosterEntries. Each poster provides a glimpse into farmers market culture across the nation, as well as inspiration for next year’s round of farmers market promotions. 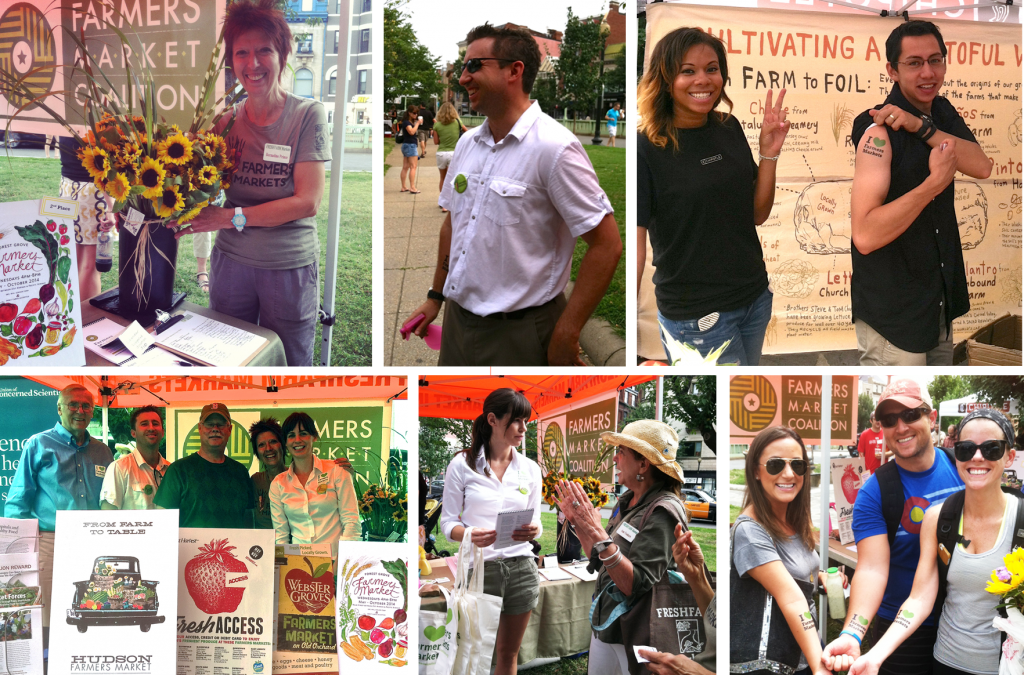 FMC Board President Bernie Prince and board members Gus Schumacher and Jeff O’Hara received plenty of visitors on Sunday, including Mark Byron from USDA FNS, reporters from Univision, Ann Yonkers of FRESHFARM Markets, members of the Chipotle regional marketing team and many enthusiastic DC market-goers eager to show off their farmers market love with one of FMC’s ‘I Love Farmers Markets’ tattoos!

* Everyone who donates $25 or more to FMC in the month of August will receive a Poster Contest Calendar!