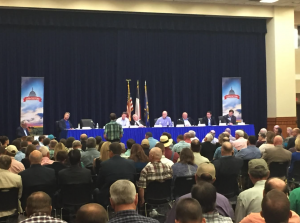 Farmers and ranchers gather before the House Committee on Agriculture for the first of three Farm Bill listening sessions.

Hundreds of ranchers and farmers from across Texas and the Southwest gathered on the campus of Angelo State University in San Angelo, Texas yesterday for the first of three Farm Bill listening sessions scheduled during Congress’ August recess. These listening sessions allow members of the the U.S. House Committee on Agriculture to hear directly from farmers, ranchers, and food systems stakeholders as they begin work on the 2018 Farm Bill.

Despite the collegial atmosphere in the hall, there was a palpable sense of anxiety. San Angelo, sits in the heart of Texas’ cotton country, which finds itself in the throes of a four-year downturn in the price of this vital commodity. In both his opening and closing statements, however, Committee Chairman Mike Conaway reaffirmed the committee’s commitment to policies that strengthen the farm safety net. 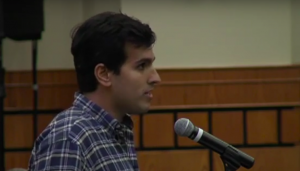 In his testimony before the Committee, FMC Research and Education Director Alex Canepa urged Congress to view farmers markets as part of this farm safety net. “Farmers markets serve as a lifeline for many struggling producers—some of whom have lost wholesale contracts in recent years—or are trying to diversify their revenue streams in order to mitigate risk,” said Canepa. “According to research conducted by the USDA, farmers and ranchers that sell directly to consumers at farmers markets have lower rates of bankruptcy and farm foreclosure than producers that rely solely on the wholesale contracts.” 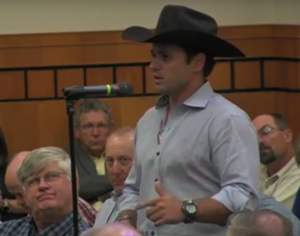 Josh Eilers speaks about his experience as a beginning rancher.

Canepa was joined by Austin-area rancher Josh Eilers who shared his experience as a beginning rancher in Central Texas with the Committee. “At Ranger Cattle in Austin, I sell my beef every Saturday at the farmers markets” said Eilers. “We’re growing and we’re able to get a premium so we’re not having to sell to big wholesalers and get bottom dollar. Instead, we’re able to create our own market.”

Finally, Cal Brints, president of the Texas Certified Farmers Market Association emphasized the work being undertaken by farmers markets to ensure that all Americans, regardless of their financial means, have access to farm-fresh produce. Brints emphasized the importance of the Food Insecurity Nutrition Incentive (FINI) and the Senior Farmers Market Nutrition Programs (SFMNP) in combatting food insecurity while keeping food assistance dollars in local economies and rural communities. 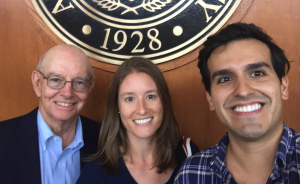 Cal Brints of the Texas Certified Farmers Market Association and Joy Casnovsky from the Sustainable Food Center in Austin with FMC’s Alex Canepa.