This past fall, I worked with fellow University of Virginia students Erica Stratton and Carla Jones to pilot the Power of Produce (POP) Club program at the Charlottesville City Market in Charlottesville, Virginia. We heard about how successful Jackie Hammond had been starting POP at the Oregon City Farmers Market and were eager to bring the program to Charlottesville. The POP Club uses fresh produce at farmers markets to bring together families and farmers. POP empowers children ages 5-12 to make healthy food choices by providing each child with market currency to spend on fresh produce each time they come to the farmers market. POP provides a fun way for children to engage in the local food system through conversations with farmers, buying local produce, trying new foods, and understanding the importance of healthy food choices. In addition to providing market currency each week, POP clubs give kids a chance to “play with their food” through activities like blending smoothies with a bike blender, making real Mr. Potato Heads, and blindly guessing vegetables based on textures and shapes. Besides being fun, these activities introduce children to new foods in a variety of ways. According to dietician Ellyn Satter, children must be exposed at least 15 times to a new food before they learn to like it. 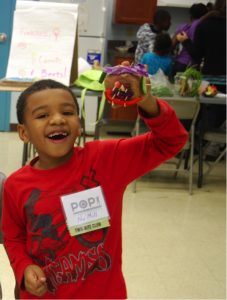 We had great success in Charlottesville with ninety-three children and their accompanying friends and families participating in the POP Club program over the four-week pilot period. Through experiencing healthy foods in different ways, such as touching foods, observing their peers eating, and preparing the food themselves, 88% of the children that responded to a post-survey reported that they tried a new food and liked it. One of the parents of a POP Club participant was impressed when her kids started bringing $2 of their own allowance to spend at their favorite vendor booth each week after our pilot ended. While the program’s success was visible to parents, farmers, kids, and market managers alike, the Charlottesville City Market does not have the capacity to continue the program. However, since the end of our project, we have received emails from many markets around the country that want to start a POP Club in their city.

We have been inspired by the local impacts of POP but imagine having POP Clubs at farmers markets across the country! The Power of Produce Club program and the Farmers Market Coalition have agreed to collaborate in order to provide resources and support to the growing national “POP movement.” By becoming a formalized program under FMC, POP materials will be available to FMC members on the website in coming months. Members will have access to logo’s, signs, evaluation tools, and resources on our lessons learned to provide markets with a starter kit to create a POP Club at your farmers market.  As these materials are being developed, interested markets are invited to connect with POP via the Power of Produce facebook page.