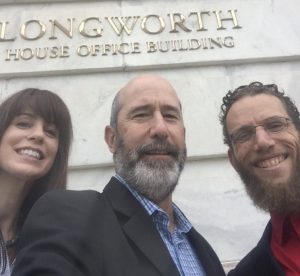 Last week, Farmers Market Coalition staff and board members were on Capitol Hill as part of our ongoing discussions with legislators about FMC’s legislative priorities and the farm bill. In recent months FMC has visited with legislative ag staff, attended listening sessions, and worked with local markets to bring their representatives to market. This time around, FMC Policy Specialist, Ben Feldman was joined by Executive Director, Jen Cheek and board Treasurer, Gary Matteson in meetings with members of both houses of congress and both parties.

While the 2014 farm bill doesn’t expire for another year, the complexity of it demands that work begin well in advance of the September 30th, 2018 expiration date. Much of the work on the bill is happening now, with many listening sessions and hearings already completed. House Agriculture Committee Chairman, Mike Conaway has said that he is committed to completing the farm bill on time, and that he expects to have the bill on the house floor this year. Although questions around the budget and the goal of the Republican Freedom Caucus to slash farm bill spending, primarily through cuts to SNAP (which FMC strongly opposes) leave the ultimate fate of the bill in question. You can read more about the context of the 2018 farm bill in the National Sustainable Agriculture four-part series on the subject.

Part of the process of larger (sometimes called omnibus) bills, such as the farm bill, includes the introduction of what are known as marker bills. These bills are designed to indicate priorities and stake out positions for members of congress with the goal of having them included in the final bill.

One such bill that was recently introduced by Marcy Kaptur (D-Ohio), is the Urban Agriculture Production Act, which FMC supports. While the bill is focused on urban agriculture it also contains key provisions that support farmers markets. By being on hill the week after the bill was introduced, we were able to speak to legislators about our support for the bill. In addition to the urban agriculture sections, the bill also proposes increasing the Farmers Market and Local Food Promotion Program Funding from $30 million to $40 million, adding Veterans to the Senior Farmers Market Nutrition Program, as well as loan guarantees, and improved data collection and reporting for farmers markets.

In other farm bill news, last Thursday, the Senate held a hearing on Federal Nutrition Programs, during which, Diane Whitmore Schanzenbach Director of Northwestern University’s Institute for Policy Research indicated that programs that support SNAP spending at farmers markets are having positive results.

With things moving quickly on a farm bill that still needs lots of work, FMC will be actively engaged, both in DC and with our members to ensure that the farm bill represents the needs of farmers markets, the farmers who sell at them, and the customers who rely on them.