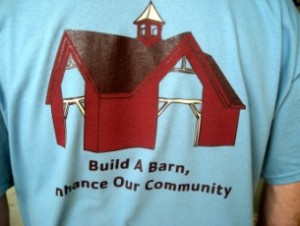 In many ways, the Hemlock Farmers Market (HFM) in Hemlock, Michigan looks much like many other farmers markets across the US – a vital part of a small community; designed to support area producers and to provide healthier options for its residents; changing and growing from year to year. Over the past several years – indeed, since very early in its existence – HFM has been focused on growing in a very specific way: creating a new home for the market by doubling their current footprint, a 50-foot steel pavillion, and building a new timber-frame post and beam barn.

In 2011, HFM had an opportunity to win a free post and beam barn from the Farmers Market Great Barn Giveaway, a nationwide contest that would award a barn to one deserving farmers market. As many farmers markets lack permanent, weather-proof, outdoor structures in which they can host their market and store market materials, The Great Barn Giveaway, sponsored by Yankee Barn Homes, Farmers Market Coalition, and American Farmland Trust, offered an innovative and extremely useful opportunity for one deserving farmers market.

HFM was named one of three finalists in the Great Barn Giveaway, but was ultimately second runner-up to the Coventry (CT) Regional Farmers Market. Coming this close to their goal didn’t set HFM back as it could have – rather, the close call seems to have galvanized HFM even more.

Needing to raise $60,000 to purchase the barn kit (plan shown below; source), HFM’s first funding – a Conservation Fund mini-grant, awarded due to HFM’s plan to use locally grown and harvested timber for the barn siding and roof sheeting – came in early 2012. Hemlock Semiconductor then pledged to give $40,000, calling on the community to come together to meet the remaining $20,000. By talking about the project at the weekly farmers market and through a series of creative and engaging community events, including a Field-to-Table Venison event complete with butchering demonstrations and a 3-course venison meal, Hemlock residents came together and, to date, have contributed roughly $35,000.

Surpassing the final $20,000 needed to purchase the barn kit, the remaining donations have been used for purchasing the materials needed to expand the pavillion and for labor costs. An additional $7,000-$8,000 is expected to be needed for final touches such as lighting and paint. 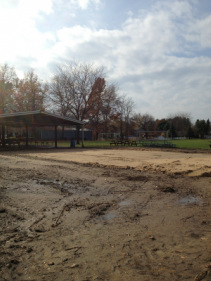 At the time of writing, the doubling of the pavillion is completed; the barn footprint has been cleared 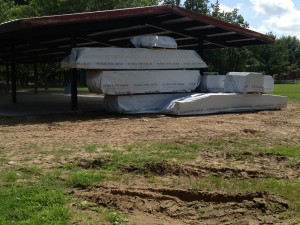 the barn kit has been delivered (source: Dan Keane) 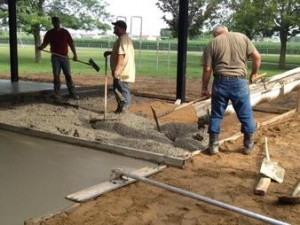 the barn foundation is being poured

HFM has set Saturday, September 21 – its annual Sawdust Day Festival – as the day on which the barn will be dedicated.

HFM serves as a powerful example of the strength of community that grows up and around farmers markets. In less than two years, HFM has successfully made its goal a reality, setting a prime example for other markets across the country looking to do the same. The Farmers Market Coalition is delighted that the Great Barn Giveaway was able to serve as a catalyst for this great project.