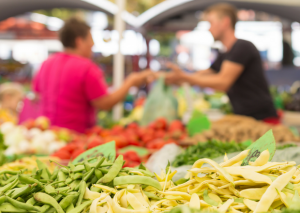 No matter how you voted on election day, chances are you’ve read a headline like this: “Election Highlights a Growing Rural/Urban Divide.” In all the post-election hubbub, media outlets from the New York Times to Fox News agreed on one thing—urban and rural Americans seem farther apart now than at any point in recent memory.

The good news is that we’re less divided than politics sometimes makes us seem. In farming and food we have an intrinsic common interest: as the saying goes, “if you eat, you’re involved in agriculture.” We aren’t just united; the production and consumption of food illustrates at the most fundamental level that we need each other.

Indeed, at a time when our food is often shipped thousands of miles (and frequently imported), a growing number of Americans are frequenting farmers markets and supporting their “neighbors,” men and women who may drive 100 miles to deliver locally grown food. Every week, Americans in big cities, suburbs and small towns go to farmers markets not only to get the freshest food around, but also to keep local farmers and ranchers in business. While it’s easy to see why farmers markets are great for shoppers, people often forget that farmers and rural communities are half of the equation, in that they produce the food and support the farming operations that provide the bounty at the market stalls.

According to numbers recently released by the USDA, Americans spend at least $8.7 billion annually at farmers markets, CSAs, farm-to-table restaurants and other direct-to-consumer outlets. Because farmers markets operate with lower overheads and fewer middlemen than most other types of food retailers, most of the revenue directly benefits the 167,000 American farmers and ranchers who sell directly to consumers.

Whether they’re beginning farmers and ranchers or established producers, the revenue stream that farmers markets provide farmers and ranchers is often the difference between making it and going out of business: according to the USDA, farmers who sell directly to consumers are more likely to stay in business than their neighbors who sell wholesale.

While it seems obvious, it bears pointing out that farms staying in business is good for rural communities. In a recent study of the fertile Sacramento region, which produces nearly $1 billion in agriculture revenue per year, a team of economists at the University of California, at Davis, discovered that, “for every dollar of sales, direct marketers are generating twice as much economic activity within the region, as compared to producers who are not involved in direct marketing.” The study goes on to reveal that for every $1 million in revenue, direct-market farms create almost 32 local jobs whereas larger wholesale growers create only 10.5.

So if you’re tired of hearing how divided our urban and rural citizens are, head to your local farmers market and experience first-hand where these two worlds meet and prosper.