How An Expired Farm Bill Could Harm Local Food Programs

Last week, USDA announced the recipients of the 2018 Farmers Market and Local Food Promotion Program (FMLFPP). While this is certainly exciting news for the local food community, and we look forward to seeing the great work that grows from each project, the announcement came at a time when the future of the program increasingly appears to be on shaky ground.

With farm bill negotiations stalled, the prospects are bleak for a new bill before the 2014 version expires at the end of the month. Surprisingly enough, members of congress are not discussing an extension of the 2014 bill, but rather may be willing to let it expire. This approach would mean critical programs such as FMLFPP and the Food Insecurity Nutrition Incentive (FINI) Program would sunset. This would also mean that no new grants would flow under these programs until Congress passes a new farm bill, although funding for all previously awarded grants would continue.

How FMPP funding impacts local agriculture and communities is illustrated by the goals set forth by one of the recently announced 2018 FMPP grantees, Mississippi’s Hernando Farmers Market. 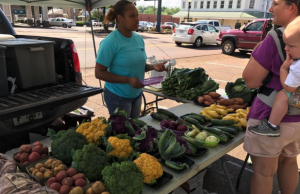 Patrice Richardson (Richardson Farms) talking to a frequent shopper about unique varieties of produce at the Hernando Farmers Market.

With support from an FMPP grant, Hernando Farmers Market, an FMC member, aims to increase sales for its farmers and vendors by providing business development training, and using data driven outreach to target new and existing shoppers.

“We are fortunate to receive the grant as it gives people of all ages an opportunity for entrepreneurship through agriculture, and provides fresh, healthy and accessible farm products to our citizens and surrounding communities,” said Gia Matheny, Community Development Director of the Hernando Market. “Increasing the number of vendors, shoppers, and variety of products will also increase tourism to our city and improve our local economy.”

While funding for the Hernando Farmers Market project and the other 2018 grantees is secure, future years of funding could be at risk if Congress fails to act soon. And unfortunately, we don’t have to look too far back for a precedent. When the 2008 bill expired on September 30th 2012, no new bill was poised to replace it, and as a result, no FMPP grants were awarded in 2013. 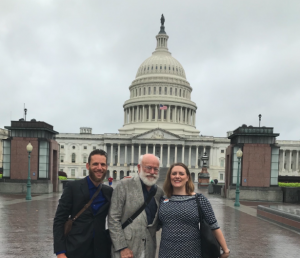 In an effort to make a final case to Congress regarding the importance of FMPP and other local food programs, FMC members from states across the country, including Illinois, California, Minnesota, Texas, Indiana, and Pennsylvania joined me last week to visit Capitol Hill, and share with lawmakers how funding from these critical programs supports farmers markets, strengthens business for local farmers, and increases healthy food access for communities.

Amid all the uncertainty, one thing is clear as the September 30th deadline closes in: we’re facing an uphill battle, and need to do everything we can to prevent a repeat of 2013. Given the great work and projects these grant programs have supported, we don’t want even one year to pass without building on the progress made advancing the nation’s local food systems.

Time is running out to speak up for local agriculture before the September 30th deadline. Please contact your lawmakers today, and tell them to deliver a farm bill on time that provides mandatory funding for these vital grant programs. Remember: your voice is a critical component to the future and prosperity of America’s family farmers.