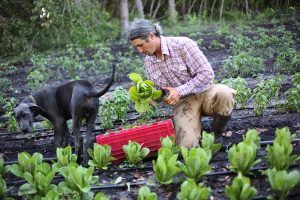 In 2013, Rafe Rivers, who says he grew up removed from a local food source in the heart of Atlanta, became the co-owner of Canewater Farm in Darien, GA. Backtrack some years ago and Rafe was slotted for a diploma from the Terry College of Business at the University of Georgia. Instead, the Agroecology and Sustainable Foods Certificate that was supposed to act as his minor took center stage.

He coupled his enthusiasm with hands-on farm experience as he studied environmental ethics, social justice, fell in love with good food, and honest hard work. By the time he finished a 6 month program at UC Santa Cruz, he knew farming would be his.

Originally intent on farming in the Rockies, family back South helped steer him and his wife, Ansley, to their coastal Georgia property. The piece of land required some serious TLC;  20 acres of planted pine tract meant a complete overhaul to be farmable. All while the acidic soil posed challenges of its own (we’re talking composting, cover cropping, rotating, etc). Despite these hurdles, their farm grew from one acre to 10 acres in their first year as farmers.

The Rivers got their business off the ground at the Forsyth Farmers Market in Savannah, GA.

“In a ton of ways, the market was the first place we established our brand. It’s kind of how we met our community.”

Being new to the area, the market was a place Rafe and Ansley met friends and could bring their young daughter. Rafe enjoys leaving the farm behind on market days, introducing and educating customers to seasonal and varied produce, including a plethora of peppers you haven’t heard of. Market interactions developed a deeper support system for the Rivers while also extending their business ventures.

“At Forsyth we develop community relations through food and it has served as a platform to grow and market our business. We developed most of our restaurant relations from chefs who approached us at the market.”

Our interview with Rafe took place in between such restaurant deliveries, deliveries that can total 30-35 in a week. He expressed his appreciation for being able to work on a beautiful piece of land and make a living doing what he loves. He is grateful for the loyal customers who appreciate the journey that led him and Ansley to farming, and show up to support them at market every week.