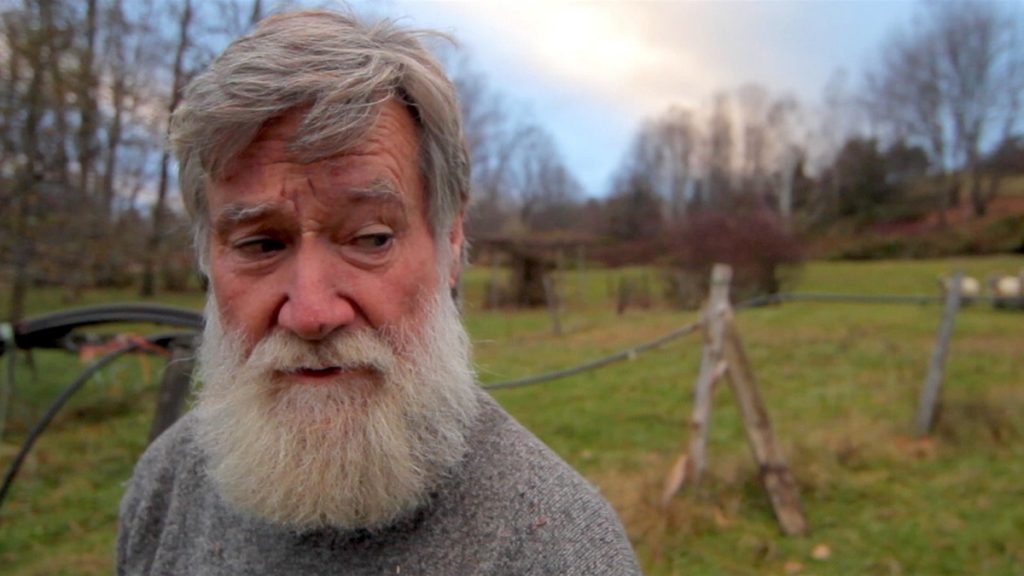 That’s what struck me most during my conversation with Tony Stone, director of the new documentary Peter and the Farm, a character study about an aging and afflicted marine-turned-artist-turned-farmer, Peter Dunning. Here, he conveyed a sentiment Peter had passed along to him.

“It’s about making a life.”

A simple concept, but an impactful one. One I’ve been thinking about for days.

Peter has spent the past 40 years of his life on Mile Hill Farm, a farm in Vermont specializing in organic beef, pork and lamb. And contrary to the idyllic, wholesome lifestyle many dream organic farming to be, it hasn’t been easy. Farming is work – hard, dirty, dangerous work. And it’s even harder when done alone.

Peter’s life is a complex existence; marred, yet buoyed, through tragedy and triumph.

Through the film’s year-long journey, Peter recollects in charismatic detail vivid stories tangled in both torment and humor – all clues as to why we find him in his current state of despair: a devastating injury, alcoholism, estrangement from his family, living day to day in solitude. These internal conflicts are only compounded by the daily grind of keeping up with, in his words, a decaying, declining farm – and witnessing his life’s work wither before his eyes. Out-foxing coyotes and the bloody, meticulous task of slaughtering sheep are only just the beginning of an endless list of demanding chores.

Yet, there’s a refreshing quality behind his story that boldly shines through. He’s likeable and real and sugarcoats nothing for anyone. He poses a lifetime of knowledge only attainable through steadfast commitment, and hard lessons learned through failure. He has an attitude of perseverance anyone hoping to find personal achievement would envy. The farm will not last forever – it’s true. But Peter’s resolve in the face of this fact is timeless.

I spent the first 20 years of my life on a small farm that raised livestock, and found myself laughing and crying and moved in ways only a farmer could understand. Even when the farm drives you to the point of insanity, you still love it deeply and selflessly, like Peter does. It’s much more than living. It’s an identity. It’s a life. And for better or worse, Peter has made one.

Peter and the Farm was released November 4 on iTunes and Amazon and will be playing at select theater across the country. Click here to learn more, and View the trailer here.

Disclaimer: Those unfamiliar with raising livestock might find themselves squirming during some of the scenes (hint: sheep slaughter).