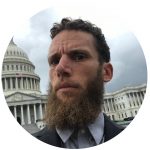 Ben has a long history in non-profit leadership, within the food system and at the Farmers Market Coalition. Prior to his current role as FMC’s Executive Director, Ben worked as the organization’s Policy Director and served as a board member. Ben’s career includes helping found the California Alliance of Farmers’ Markets, running the California Market Match Program, championing equitable food policy at the local, state and national level, and running the first farmers market on a Kaiser Permanente campus.

Ben lives in Albany, California (Lisjan Ohlone Territory). He can be reached at ben@farmersmarketcoalition.org or (888)362-8177 extension 710