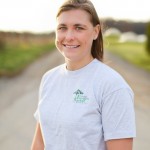 Dru (Bernthal) Montri grew up on her family homestead in Frankenmuth, Michigan.  She was introduced to the agricultural industry through her family’s third generation meat processing business, Bernthal Packing.  Dru received a Bachelor of Science in Horticulture from Michigan State University (MSU), a Master of Science (M.S.) in Horticulture from The Pennsylvania State University, and a dual degree Doctor of Philosophy (Ph.D.) in Horticulture and Community, Agriculture, Recreation and Resource Studies with a Graduate Specialization in Gender, Justice and Environmental Change from MSU.  Her M.S. research focused on the production and consumer demand for specialty crops.  Her Ph.D. research focused on sustaining farmers markets in low-income, urban areas.

Dru and her husband, Adam, own and operate Ten Hens Farm, a year-round farm in Bath, Michigan, where they sell twelve months of the year through farmers market and restaurant outlets.  Their small-scale, diversified vegetable farm has a strong focus on season extension utilizing field production and six production hoophouses totaling approximately 17,000 square feet.

In addition to managing their own farm, Dru has been committed to regional food system work since the early 2000s.  Dru has been the Director of the Michigan Farmers Market Association (MIFMA) since its inception in 2006.  In the past nine years, together with a diverse group of stakeholders, she has led MIFMA’s organizational and membership development as well as its strategic planning in support of the organization’s mission to create a thriving marketplace for local food and farm products.  During this time, Michigan has seen the number of farmers markets grow from 150 to more than 300 today.  Simultaneously, MIFMA has grown from an idea to an association of 400 members with programming for farmers market mangers, farmers, and small businesses focused on professional development, marketing, state and national policy, and food access.  Dru and the association are committed to sustaining, supporting and promoting farmers and farmers markets throughout Michigan.  At the same time, she has remained involved with the Michigan meat industry through her role as Executive Secretary of the Michigan Meat Association (MMA).

In January 2014, Dru was appointed by Governor Rick Snyder to the bipartisan Michigan Commission of Agriculture and Rural Development.  The Commission has the responsibility to recommend, and in some cases determine, policy on food, agricultural, and rural development issues.

Dru believes that the overlapping nature of her work with MIFMA, the MMA, owning and operating her own farm, and serving on the Commission of Agriculture and Rural Development strengthen and support each other.  She is also the proud mother of two daughters, Lydia (6) and Alison (3), and enjoys spending free time with family and friends, cooking, reading, traveling, and enjoying the beautiful outdoors.