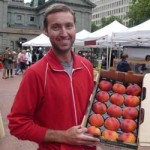 Since 2005 Jaret has been working as a farmers market manager, first with GreenMarket in NYC and now at Portland Farmers Market in Portland, Oregon. Previously, he was a chef for more than ten years, also worked and lived on small scale CSA farms in Oregon and Maine. Jaret has a protracted love for farmers markets fueled by his love of food.  “Farmers markets connect me to my culture and I am continually inspired by all of the good work that goes into a simple meal.”

In his work with PFM, Jaret has become acquainted with a large network of farmers and food producers, local and state officials, OR and WA departments of agriculture, chefs, food policy advocates, and friends of the markets.  For the majority of his career, he’s been involved with the operations of restaurants, farms, and non-profits.  Jaret played a key role in the expansion of Portland Farmers Market over the past four years: growing from four markets to six; adding a Sunday market in 2009 and a Monday market in 2010.  Additionally, in 2010 PFM expanded the Saturday market’s footprint from one block to two, growing the available market stall spaces from 140 to 160. Over this time period Jaret was also working closely with Oxdata Systems helping them to develop the now national Manage My Market software program. Jaret looks forward to offering his perspective to a national organization committed to strengthening farmers markets for the benefit of farmers, consumers, and communities.