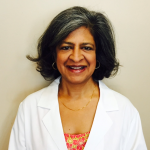 Dr. Swati J. Shah, after growing up in Texas and South Carolina, completed her undergraduate studies at The Johns Hopkins University, and then went on to complete her medical school training at Jefferson Medical College.  She did her internship and residency in the Department of Obstetrics and Gynecology at Tulane University School of Medicine in New Orleans.  Subsequently she stayed in the New Orleans area to have a successful practice for 10 years with Crescent City Physicians, Inc, a subsidiary of Touro Hospital and Infirmary from 1999 to 2009.  Her responsibilities included an office practice, based primarily in the urban areas of the city, as well as volunteer teaching of medical students and residents.   Upon completing her Master’s of Public Health degree, with a concentration in Maternal and Child Health within the Department of Community Health Sciences in 2009 from the Tulane University School of Public Health & Tropical Medicine, Dr. Shah went on to pursue various public health positions in the New Orleans and Southeast Louisiana areas. Throughout all her public health endeavors from 2009 through 2012, she has continued to provide ob/gyne services for a variety of patients, including the underserved via locums (contract) assignments to rural areas of the US. Through those years of travelling as an ob/gyne (2009-2015), she had the opportunity to work closely with many minority populations, including the Hawaiian, Mexican-American and Navajo people.  These opportunities raised her cultural awareness of the impact that native and local foods have on the health of the individual, as well as the health of the community.

Currently, as of the past 15 months, while still living in her home in New Orleans, she is working as an Ob/Gyne Hospitalist in Baton Rouge where her primary responsibilities include caring for patients who have had no prenatal care or no prior gynecological care. Her hobbies and personal interests include: travel, jazzercise, zydeco, swing and salsa music with or without dancing, local farmers’ markets, gardening, cooking fine dining, and volunteerism in whatever opportunity that presents itself. Most recently, she has served on her college class’ 25-year reunion (2015) planning committee and is currently on the planning committee for the Society of Ob/Gyne Hospitalists Annual Clinical Meeting for both 2016 and 2017.