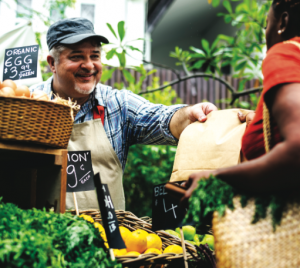 This USDA ERS report came out earlier this year and has some interesting data and new conclusions about shoppers, although the authors stress that more analysis is needed. And thank you to Dr. Dawn Thilmany for offering her input into my analysis of the report. If you don’t know her and her colleagues work in economic analysis of local food systems, do check out the USDA’s new Local Foods Economic Toolkit.

Some points from this report (in blue italics):

-Households that patronize DTC outlets more often appear to buy a larger quantity and/or a different variety of fresh fruits and vegetables than other households.

So it’s not just that DTC buyers spend more on F&V (which most reports suggest they do) but that they seem to also buy more and expand beyond the normal choices of a non-DTC shopper. Of course what is stressed again and again in here is that we cannot say that DTC shopping is the cause of this behavior, only that it is correlated to those types of shoppers. This is important as it may be that DTC channels attract those shoppers already interested in increasing their F&V quantities and varieties.

Or maybe we do make them healthy food shoppers; we just don’t know yet. Sp yet another reason why markets and market farmers collecting data on their shoppers is so vital now.

So, the idea could be for markets to a) let this type of shopper know that DTC channels are an ideal place for those searching for added quality and quantity of F&V, and b) to collect this data on market shoppers across socioeconomic strata to see if that holds true for all types of market shoppers. [Check out FMC’s newly launched Farmers Market Metrics data collection platform if you’re interested in collecting data]

That would tell us if higher income levels isn’t what is driving this added purchasing, but possibly that the desire for healthy strategies has led these consumers to DTC channels and they are willing to spend more of their income on F&V because they see the return to their own lives from it.

-Using data from USDA’s FoodAPS, we initially compared fruit and vegetable spending between households that did and did not patronize DTC outlets. After estimating an econometric model, we further confirmed that patronizing DTC outlets raise a household’s demand for fresh products, as measured by the household’s total expenditures, but has no impact on spending for processed products.

This is extremely important as economic researchers believe that spending at DTC outlets is only a shift in spending, rather than being additional spending for food purchases. However, this report suggests that those shopping at DTC outlets are not reducing their other spending but actually adding to what they already spend and increasing their F&V spending.

But again, much more data is needed to make sure that we are not just seeing an increase in spending among the highest income brackets or only for certain types of shoppers. As Dr. Thilmany said, “it definitely motivates the need to see if this is households investing more of their consumer dollars in food…and perhaps quality food.”​​

-The average household buys these foods directly from farmers during roughly 3.5 out of every 100 weeks, or between 1 and 2 weeks each year.

Also interesting as it supports the strategy of turning occasional shoppers into regular, return shoppers, and even adding incentives for returning at specific times of the market year or when certain items (like fruit) return to market just as store coupons are timed to do for their slower days or weeks.

One last thing to consider for this data is how the merger of Whole Foods and Amazon may have left a gap for DTC channels to gain more shoppers. Those searching for a trusted “brand” to access healthy F&V could be driven in larger numbers to DTC channels, especially if we understand what those WF shoppers used to value about their F&V purchases,  since based on news of falling same-store sales* at WF, they may no longer believe the chain offers or at least feel they can access the same or better value at other outlets now.

Check out this other blog post on the Amazon/Whole Foods merger and its possible effect on DTC channels.

*Same-store sales compare that store’s sales to previous years sales and is one of the most important metrics in retail.