Many readers may recall the article SNAP Sales Soar, published in the spring edition of the market beet, in which FMC reported on the increases in SNAP redemptions since 2009, when SNAP state by state statistics were first published in Real Food, Real Choice: Connecting SNAP Recipients with Farmers Markets. Here we look at the exciting growth in 2011 and the opportunity for 2012.

In the past five fiscal years, the number of farmers markets and direct marketing farmers authorized to accept SNAP has increased 360%, and 52% between 2010 and 2011 alone.  According to the USDA Food and Nutrition Service Benefits Redemption Division, there were 2,445 farmers markets and individual direct marketing farmers authorized to accept SNAP, as of September 30th, 2011.   Editor’s note: unless noted otherwise, a “year” refers to federal fiscal year, defined as October 1 through September 30 of the next year. 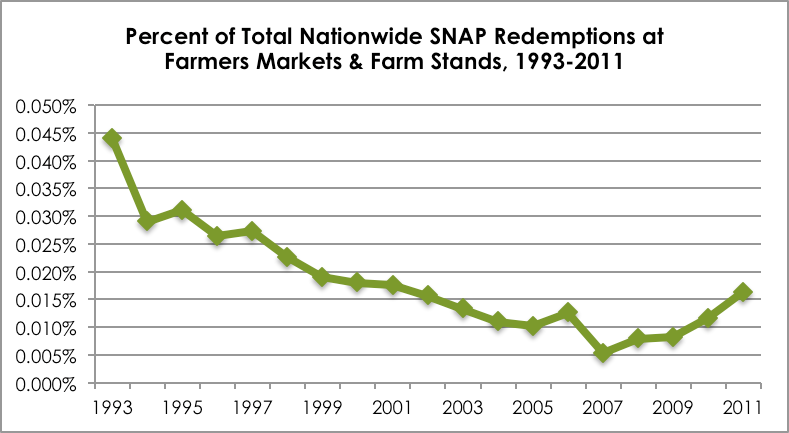 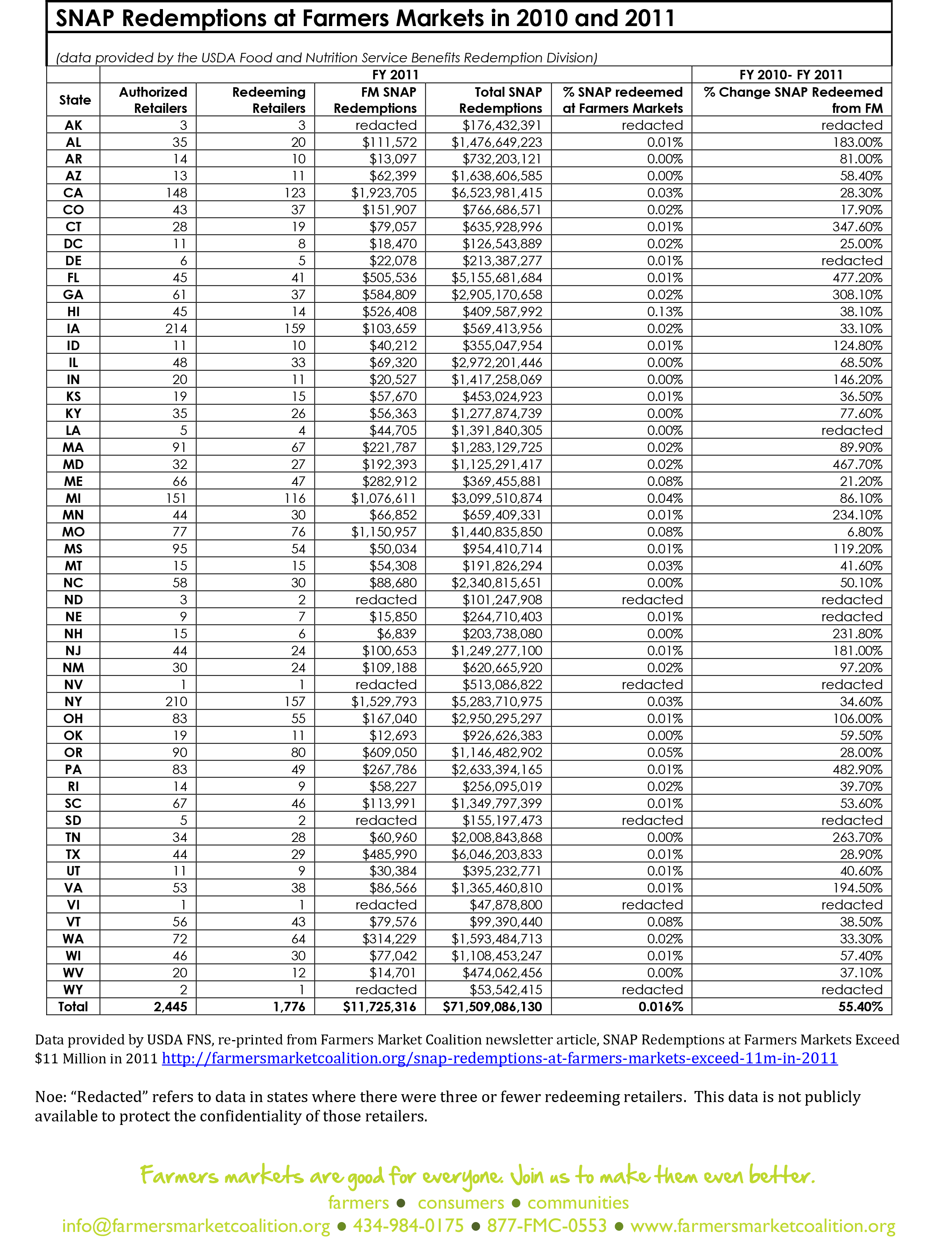 While a 55% one year increase in the degree to which SNAP benefits are supporting direct-marketing farmers is encouraging, it is also easily apparent that the majority of SNAP dollars are being used elsewhere—grocery stores, superstores, convenience stores, and other outlets.  This represents a huge opportunity for farmers markets, and partnering organizations that support food access and equity at the community level, to educate and engage this very large and important customer base.

However, we recognize that all of these numbers represent only part of the story. In trying to put these numbers into action, many questions remain.  For example:

1)     What are the logistics, motivators, and challenges experienced by farmers markets seeking to implement SNAP?

2)     What are the characteristics and motivators of SNAP shoppers who choose (or choose not) to use their benefits at farmers markets?

3)     Why is there a discrepancy between the number of “authorized” and “redeeming” SNAP retailers in so many states?  Did these famers markets or farmers acquire the permit or technology late in the season, or are there other factors at play?

5)     How important are financial and non-financial incentives in attracting and retaining first time SNAP customers to a farmers market?

Fortunately, these questions and more are on the radar of the USDA Food and Nutrition Service, which launched a study of Nutrition Assistance in Farmers Markets through their Office of Research and Analysis.  You can learn more about this study in another article, here.

Regardless, the consistent growth of SNAP at farmers markets over the last three years is clear.  According to Farmers Market Coalition Executive Director, Stacy Miller, “this growth is due to not only to the continued leadership of state farmers market organizations and national advocates, but to the thousands of farmers markets who are committed to maximizing choice for all members of their communities and ensuring that more and more of the large SNAP pie goes into the pockets of local farmers.”

SNAP is, by far, the largest program administered by the USDA. The fact that last year, only .016% of this $71 billion directly supported the many, many thousands of independent farmers, ranchers, and other local food producers stewarding rural America represents a huge opportunity for change.  More specifically, it represents an opportunity for new relationships to be forged between farmers, food, and eaters– regardless of age, lifestyle, and income level.