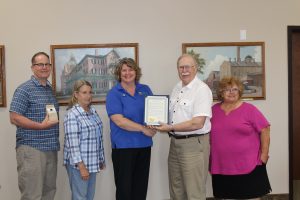 As an FMC member, Market Manager Linda Bader received FMC’s announcement about the newly offered Local Proclamation Template, and emailed the City of St. Louis DDA Director and City Clerk on May 29th to gauge their interest. Within the email she attached the proclamation template and sent FMC’s ‘Why Farmers Markets’ infographic. Following a few tweaks and customization, the city approved of the proclamation in an early June council meeting, and the group met back on June 19th to shake hands and pose for a picture (above).

The St. Louis Farmers Market has been doing big things since its inception. Established in 2016, the market is run by a volunteer market manager with guidance from a community advisory committee with MSU-Extension, St. Louis DDA, vendor, Commission on Aging, church, and St. Louis public school representation. The market has been keeping track of its data through FMC’s Farmers Market Metrics Program, and last season they estimated 6,800 visitors to market, an estimated $89,000 in vendor sales, and $107,000 spent on local businesses surrounding the market.

Take a page out of St, Louis Farmers Market’s book—and ours. Utilize the Local Proclamation Template and other NFMW resources to rally community support, engagement, and recognition during the week to celebrate all things farmers market!