The Anselma Farmers and Artisans Market – a GMO-FREE Market

by Sam Cantrell, FMC Member, Farmer, and founder of The Anselma Farmers and Artisans Market 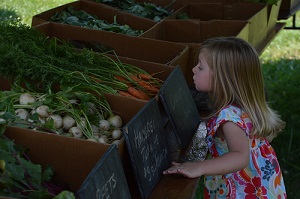 Our farmers market was started in 2004 as a program of Maysie’s Farm Conservation Center, a small non profit educational organization committed to “working toward a local, sustainable food system”. After four years in the town center of a “new urbanist” development in a township that adamantly refused to consider a variance to their ordinance against temporary signage, we moved the market to its current location, on the grounds of a restored, historic grist mill in Chester Springs, PA. Our roster of vendors has changed significantly over the years, but our basic policies have remained consistent: producer-only, as local as possible, as organic as possible, as supportive as possible of new and beginning farmers and as committed as possible to educating our customers about their role in bringing change to the food system.

When we began talking about becoming a GMO free market, we were met by little resistance from our vendors, but some needed clarification on just how dangerous and pervasive GMOs are. After viewing their ingredient lists, we assisted our baked good and sausage vendors by providing names and sources of products that can be substituted for their conventional ingredients. We advised them, “if the ingredients cost more than before, it’s OK to raise your prices a little bit. Explain the situation to your customers. They need to understand that healthier food will cost more than conventional food, but it will be worth it – immediately for the health of their family and ultimately for the health of both our food system and our good friend, the planet.” The only not-yet-transitioned vendor has been our hosting organization, the Mill at Anselma, which sells small amounts of flour ground on site from local, not necessarily GMO-free, grain farms. We’ll be talking with the Executive Director in the next week or so to see if this year the Mill will agree to take that extra step of buying organic grains so that the market can unequivocally bill itself as GMO-free.

Last year we made do with verbal agreements on the GMO issue from our vendors, but this year we will be incorporating a new clause in the Market Policies section of our Membership Agreement that vendors sign and submit with their membership fees. These policies are, perhaps, initiated by Maysie’s Farm, but then are discussed and democratically voted on by the vendors involved at the start of the season. Once we get the Mill on board, and any new value-added vendors we might recruit this year, we really don’t expect to have any transgressions from the policy – but we will be asking questions if there’s any doubt. We understand that anything that might be considered a “health claim” must be valid and substantiated.

The Anselma Farmers and Artisans Market is a community event that brings disparate residents of the local area together in a friendly, healthy, interesting environment. It is a marketing opportunity that has helped numerous first-time food producers as well as established local farmers and vendors market their products directly to retail consumers. But most of all, it is an educational tool, reaching people who are just becoming aware of food system issues and expanding their understanding of the problems of the conventional system, the benefits of the local, organic alternatives and the simplicity of making the change to the latter. It is also a great opportunity to educate consumers on the importance of understanding the pervasiveness of genetically engineered products  and glyphosate contaminated foods and the effects these toxins are having on human health, animal welfare and ecological diversity. We feel that branding our farmers market as GMO-free helps us bring public attention to these issues and assists the efforts of GMO FREE PA, the statewide organization that is cultivating public and legislative support for a GMO labeling law.

While other local markets have not officially adopted a GMO FREE stance, many market managers are instituting a GMO FREE PA FARMER logo that identifies qualifying vendors at their markets. Farmers who are verified as non GMO and become members of GMO FREE PA will be listed as such on the organization’s website: www.gmofreepa.org