The Evolution of the CSA – Part 1: The Rise, Decline, & Reinvention

Why are CSA sales declining? In many areas of the country, CSAs are reporting declining sales and fewer number of returning customers. FMC Senior Advisor Darlene Wolnik takes a look at the issue in this two-part blog series. Here in Part 1, she examines the origins of the CSA movement in the U.S and the current pressures facing CSAs, including the CSA definition, the explosion of box programs run by non-farms, and the barriers to using benefit programs as CSA members.

In Part 2, she takes a look at the existing information to offer a path forward for family farms and local producers. [Read Part 2: Looking to the Future]

Some years ago, I was lucky enough to take a course at the Schumacher Center for New Economics in Great Barrington Massachusetts. Beyond the knowledge that I gained about efforts in many communities to “de-commodify” land, labor, and wealth, another high point was touring Indian Line Farm (ILF) in South Egremont, touted as one of the first two Community Supported Agriculture (CSA) farms in North America.

The CSA had been formed by farmer/activist Robyn Van En and Jan Vander Tuin in 1985, and operated until Van En’s untimely death in 1997. 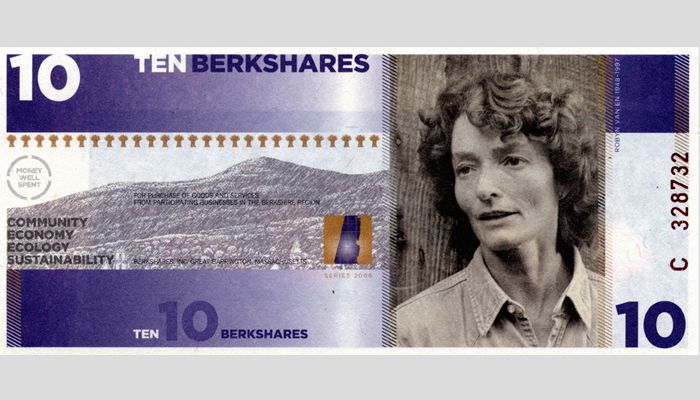 At that point, Robyn’s son David was approached by two farmers already known to the Van En family, Elizabeth Keen and Alexander Thorp, who wanted to maintain the farm. Unfortunately, the financials of maintaining the land by the Van En family didn’t work out, but the group had an ace up its sleeve: the Schumacher Center was less than a mile up the road.

The Center’s Susan Witt, along with the Community Land Trust in the Southern Berkshires collaborated with the Berkshire Highlands Program of The Nature Conservancy to help ILF. The Community Land Trust purchased the farm, simultaneously selling the buildings to Keen and Thorp and conservation restrictions to The Nature Conservancy. The Community Land Trust holds title to the land and leases it to Keen and Thorp on a 99-year basis, providing security of tenure. The lease guarantees the lessees ownership of the house, barn, other out-buildings, and farm improvements, enabling the farmers to build equity of their improvements.

As a result of that agreement, Indian Line Farm continues to operate a CSA and to offer many other hands-on experiences on their farm. Interestingly, the other first CSA in the U.S. was the Temple-Wilton Community Farm in southern New Hampshire, which is also still operating as a CSA, and also moved the land into a land trust.

Other CSA farms, however, have not been so lucky to have partners like these or felt as supported by their community.

A few years ago, Simon Huntley from Small Farms Central (SFC), a national technical assistance and marketing partner for CSAs, began to note disturbing trends in sales and wrote a bold analysis of them in 2015 titled,“CSAs, We Have A Problem.”

“CSA will not be exactly the same model as the one that thrived from the 1990s to the early 2010s. Almost every industry has changed radically since 1990 and ours has too. I believe that the “classic CSA share” is becoming a relic of the past.” (More on SFC’s solutions in Part 2 of this blog post series.)

Huntley’s analysis was in line with what other farmers and advocates began to see as well. From a 2018 article titled It’s the Amazon World: Small‐Scale Farmers on an Entrepreneurial Treadmill:

“CSAs are disintegrating.” Paul runs a large Community Supported Agriculture (CSA) farm where memberships brought in $300,000 less in 2017 than in previous years. That’s a huge shortfall, and my own conversations with farmers, as well as reports from other fieldworkers and farm advocacy groups, confirm that farmers across the Midwest who rely on direct sales, primarily through CSA memberships and farmers market sales, have reported similar drops (AOLC 2017; Bishop 2018; Huntley 2016).

As in some areas of the U.S. with no protection for the term farmers market, part of the issue of declining sales may be in how consumers understand what a CSA is meant to be, and how well outlets adhere to that definition. After all as a name, Community Supported Agriculture doesn’t make the type of commitment clear, nor make obvious the the value received. Even the wonderful Lexicon of Food site’s definition leaves it sweetly vague:

A mutually sustaining relationship between the consumer (shareholder) and the farmer whereby each looks out for the other’s needs and well-being. The Consumer and Producer join hands and stand face-to-face in a flux of self-interest and empathy.

Here is Small Farms Central’s list of characteristics for a true CSA:

Northeast Organic Farming Association of Vermont (NOFA-VT) has also been working to help consumers understand the term,  defining a farm share/ CSA in Vermont to “a seasonal commitment to a farm, which may also aggregate items from other farms.”  Both Small Farm Central and NOFA-VT now prefer the term “farm share”.

Another trend affecting CSA sales has been the explosion of box programs run by non-farming entities. Some of these are farmers markets offering their shoppers what are usually called market box programs. Nearly 23% of farmers markets surveyed in 2014 by USDA/AMS were used as a delivery point for these enterprises.

Most farmers markets run these programs with one primary goal of increasing local farmers’ direct sales, unlike most of the online meal kit subscriptions, which are usually owned by a for-profit company and rarely prioritize local ingredients in their offerings. What the online kits do offer their customers are simple, easy-to-follow recipes, with options for gluten-free, vegetarian-only, pescatarian-only, and so on. Most of the subscriptions price out at around $10.00/meal, according to a few review sites.

The trends in retail definitely indicate that food shoppers needs are changing in almost every way, including how they increasingly prioritize convenience: 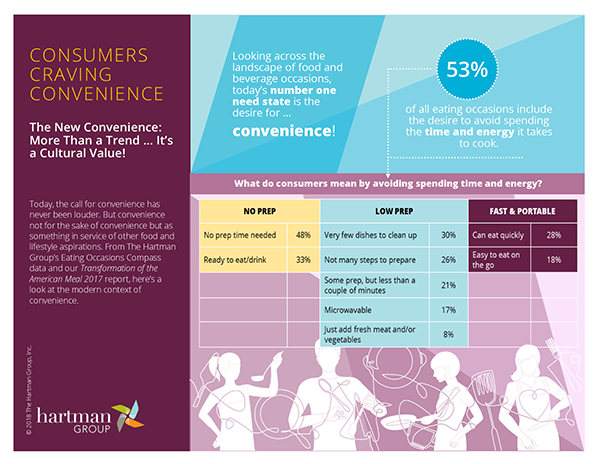 That trend will likely mean that direct marketing outlets that focus on ingredients like CSAs and farmers markets will need to find a way to balance their tactile, relationship-rich shopping culture with customer add-ons that offer speed and simplicity for those who want it.

In reaching low-income families, CSAs have long been at a disadvantage. In truth, the rapid adoption of wireless technology among farmers markets since 2004 may be partly the cause. This technology has allowed thousands of farmers markets to accept SNAP benefits and to work with partners to leverage funds to incentivize more use of markets by those shoppers. Reports certainly suggest that, even though these systems were difficult to design and even harder to manage for low capacity farmers markets, the increase in total dollars and the number of  shoppers using SNAP regularly at markets nationwide tells a story of success.

In contrast, CSAs had a difficult time convincing policy leaders that they should also be able to accept SNAP benefits, as CSAs ask for the entire payment (and usually a membership fee) at the beginning of the season. After all, that is the core of the CSA model: that the farmer gets an investment up front and can then afford to sow and harvest for his CSA members. But SNAP dollars cannot be used for membership fees, and before 2014, could not be used for purchasing food in advance. Added to those issues is the same start up difficulties faced by markets and the cost for operating card processing systems at farmer level, which can mean slim profits get eaten up by office work and transaction and equipment fees.

The traditional model of a single farm seeking and maintaining a customer base still works in some cases, but likely is most successful when the farm itself is not encumbered by land debt, or development speculation, or expected to figure out the complicated world of benefit programs on their own. Land trusts may be one solution to CSA success, but the explosion in box programs along with the lack of clarity in the old term “CSA” indicates that significant adaptation is necessary.

Part 2 of this blog series will examine some of those clarifications or adaptations proposed by farmers or CSA advocates.

[Read Part 2: Looking to the Future]