WIC FMNP: A Win-Win for Families and Farmers 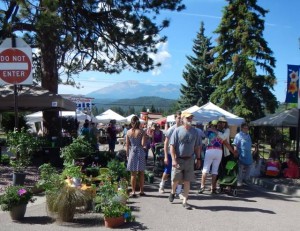 FMNP was reauthorized through 2015 at $20 million in Section 361 of the Healthy, Hunger-Free Kids Act of 2010. Unlike some mandatory programs within the farm bill (like Senior FMNP) which are revisited every five years, FMNP is among programs in the Healthy, Hunger-free Kids Act that undergo an annual appropriations process. In response to the economic and political pressure to cut funding for federal programs, FMNP funding was cut to $16.8 million, and cut again to $15.3 million in 2013–a 24% decrease from the authorized amount. According to some FMC member markets, these cuts directly diminish incomes of several thousand produce farmers, putting in question their ability to continue selling at markets in the low-income neighborhoods that may need fresh produce the most.

Providing Livelihood for Small Farmers
FMNP was designed to introduce new families to farmers markets while reinvesting federal dollars into local economies by offering additional revenue for small farmers. In 2012, the program connected families with more than 3,300 participating farmers markets and 3,000 roadside stands. FMNP coupons provide an incentive to get low-income families to the market, where they can see that farmers markets offer affordable, fresh foods, and begin to incorporate them into their regular shopping habits. FMNP funds provide just enough of a sales increase to help farmers markets in low-income neighborhoods start and become sustainable. At the Food Trust’s ten newest low-income markets in Philadelphia, FMNP made up an average of 19% of total sales for the 2012 season. This year, FMNP coupons made up as much as 59% of gross sales for a single farmers market. Over 50% of farmers interviewed in Washington state reported that sales from FMNP are strong enough that the revenue from that program is a deciding factor in whether or not to participate in a specific market. Survey results indicated that if FMNP was eliminated, 54 farmers markets would lose farmers and as many as 300 summer farm jobs would be lost. New York’s Greenmarkets report that they could lose 5-10 farmers markets in the next year if the FMNP funding is not restored to its former level.

Success Varies by State
States such as Ohio have achieved redemption rates of 85%, despite the range of challenges that WIC recipients face when attempting to access nutritious foods.  While the perception that fresh produce is too expensive plagues the population at-large, mounting evidence suggests that’s not the case. Rather then price, location plays a key factor when families lack access to transportation needed to get them to a market. An interest in eating more produce, as well as an understanding of preparation techniques also play significant roles in purchasing decisions. Information gaps are a reoccurring concern as shoppers are often unaware of coupon programs like SNAP, WIC, FMNP, and other  incentives. FMNP coupons serve to incentivize a trip to the farmers market, while complementary educational and promotional efforts ensure that the coupons are used.

Some markets with farmers certified to accept WIC FMNP set themselves apart by establishing community partnerships with neighborhood organizations to help facilitate outreach efforts and maximize the impact of FMNP. In fact, a survey of 455 FMNP recipients administered by the Michigan Department of Community Health, Michigan Public Health Institute, and Michigan State University found that combining education about the use, storage, and nutritional value of fruits and vegetables with the use of coupons was critical to the success of the FMNP in Michigan. Creative and consistent communication about market logistics and FMNP benefits ensure that recipients take advantage of the incentive.

While effective promotion of the program at the state and local levels can be time and staff intensive, states like Washington, New York, Ohio, and Michigan have successful FMNP programs in part because they’ve been able to leverage additional funds for marketing and outreach activities. The success of these states could prove to be an indicator of the program’s potential to bring healthy food to low-income populations, and serve as a model for improving the program at a national scale. Cuts to FMNP in recent years have limited or altogether halted adoption of these parallel education and outreach activities in many states, however.

FMNP is a small program unique in providing revenue for local farmers while ensuring access to nutrition-rich foods for families in need. As appropriation bills are finalized in the next few weeks, WIC families and the farmers growing the most nutritious fresh food in America hope to see FMNP restored to $20 million per year. Currently, no agricultural appropriation bills for fiscal year 2014 have been approved by Congress, but both the House and Senate have passed respective versions that include only $16.4 million for the program.