Introduction of Market
Durham Farmers’ Market (DFM) has been offering fresh produce, artisanal foods and handcrafted wares in downtown Durham since 1998. When DFM started, the market was little more than a few farmers and crafters joining the kids from SEEDS in the gravel parking lot of the old Durham Bulls stadium on Morris Street. DFM moved up the street to the Measurement, Incorporated lot in 2004, and now it has its own space in the heart of the city. At last estimation, there are an estimated 5,800 households that receive SNAP within a 3 mile radius of the market.  The neighborhood is quickly gentrifying, however, and this number is likely decreasing. 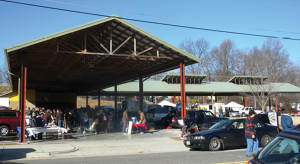 Durham Farmers’ Market is located in an urban park in Downtown Durham. The market runs year round and has 70+ vendors and serves thousands of customers. Six thousand SNAP recipients live within a 3 mile radius of the market.

Through the tenacity of those early vendors (many of whom are still selling at the market) and the support of residents who saw the value of good, fresh local food and handmade crafts, DFM have expanded to more than 75 vendors.  Vendors sell a wide variety of products including local fruits and vegetables, meats, cheeses and eggs, beer, baked goods, flowers, herbs and plants, and handmade crafts all produced in a 70 mile radius.  The large market is visited by close to a thousand residents on a weekly basis in peak growing months.  It is held on Saturday year-round, and Wednesday April-October.

The market has a long history of working to increase food access within our community. In 2005 DFM began accepting WIC Farmers’ Market Nutrition Program (FMNP) checks and in 2008 they began accepting FMNP Senior’s Vouchers. In 2010, a local nonprofit Farmer Foodshare added a Donation Station at the market, which collected over 13,000 pounds of food for local nonprofits in the first three years alone.   In 2014, after several years of work, the DFM began accepting SNAP/EBT benefits.  Later that summer, DFM launched Double Bucks, which doubles SNAP benefits up to $10. In 2015, DFM started adding $2 to every WIC Farmers Market Nutrition Program Voucher and Senior Farmers’ Market Nutrition Program Voucher.  They currently employ a SNAP/EBT coordinator who runs the EBT machine at every market and leads fundraising and outreach efforts.

“For Me, Double Bucks is really important.  It helps me afford to eat healthier.” – Double Bucks shopper, mother of two children.

Double Bucks has been funded by a variety of sources.  Customers donate weekly through dropping a few dollars in a bowl on the information table.  The market also ran a number of fundraisers, including a crowd sourcing campaign, market dinner, and Halloween costume contests.  They’ve also received grants through Duke University, the Durham Diabetes Coalition, the local Crop Walk, and Burt’s Bees Greater Good Foundation.

Partnerships in Farmers Market
Durham Farmers’ Market holds a number of events for all of its customers.  They hold a regular Chef in the Market series in which chefs offer cooking demonstrations.  They have free monthly cooking classes for children ages 8-13 that are led by local chefs.  They also hold Sprouts Kids Club on Wednesdays during the summer, in which children ages 5-12 can earn a $3 voucher by tasting different fruits and vegetables and completing a fun, educational activity.  Finally, DFM offers regularly scheduled tours for new customers.

“This place is awesome!  A great place for hanging out.”
– Double Bucks shopper, senior woman with a disability

Durham County Department of Public Health (DCoDPH) SNAP Ed staff assists with marketing and education around Double Bucks throughout the community.  The partnership was born in 2013 when they met at a coffee shop and dreamed up Double Bucks together.  DCoDPH promote Double Bucks through flyers, during grocery store tours and workshops, through community partners, in Dental and Medical offices that accept Medicaid and with an annual Bus ad that runs in English and Spanish in all Durham Public Transit.  They also assist with evaluation.  Other DCoDPH staff assists with grant writing and working to identify more secure funding sources.

Community Response
Double Bucks has been very well received in the Durham Community.  This is demonstrated by the fact that the program has been supported completely through local donations, grants and fundraising efforts for 4 seasons.  Furthermore, all but a handful of the 70+ vendors accept the tokens.  In a recent vendor survey, the majority of vendors stated Double Bucks profitable and worth the effort.

Focus groups and surveys of SNAP recipients have identified the token system DFM uses as a barrier.  Some Double Bucks customers have found it confusing and demeaning.  The token system also demands a lot of work from Market staff, as tokens are counted out by hand.  Market and DCoDPH staffs are researching to determine if there are alternative systems.

“I would never buy fruit without EBT.  This market is not accessible without it.”
-Double Bucks shopper, Duke Student with disability

Durham County Department of Public Health’s SNAP Ed program assists Double Bucks with marketing and promotion efforts. Above is a bus ad that ran in all GoDurham Buses in English and Spanish during the peak market season.

Future Plans of the Market
Currently, the market and DCoDPH is planning on extending Double Bucks beyond SNAP and Farmers’ Market Voucher recipients.  They hope to launch a program in which recipients of public assistance programs can use cash at the market and double it up to $10 at each market.  This would allow customers with no money on their EBT to still shop at the market and expand the reach of the program to the thousands of Durham residents who do not receive SNAP.

Recommendations for other Markets

The program needs constant creative marketing and promotion.  One of the best ways to market is through community partners.  Utilizing others who work with the SNAP population is a great way to spread the word.  Send quarterly or biannual emails with new promotional materials attached to keep it in the forefront of people’s minds.  This is a great role for SNAP Ed to play as SNAP Ed agencies typically have a vast range of community partners that reach SNAP recipients. 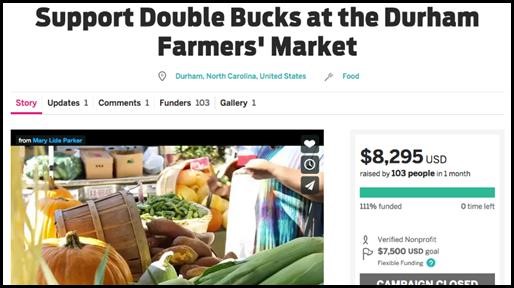 Double Bucks got initial funding through a crowd sourcing campaign in which it raised over $8,000 in one month. It is currently funded through local fundraising efforts and through grants from small foundations. Keeping the funding small and local has allowed Double Bucks to be flexible with its programming and quickly adapt to community changes and needs.