Philadelphia, Pennsylvania – “We started out offering children’s environmental programs, and experimented with some raised vegetable beds,” recalls Skip Wiener, Executive Director of the nonprofit Urban Tree Connection.  “The moment we began introducing food, it was like a revelation. Parents, grandparents, aunts, and uncles emerged from their houses. When crops appeared, people appeared, and we realized we had tapped into a dormant culture of farming that we didn’t even know existed in West Philadelphia.”

In 2010, the nonprofit Urban Tree Connection (UTC) struggled to fulfill its dream of creating a working urban farm in the middle of a food desert on an abandoned lot previously owned by a construction company. Surrounded by homes on a full city block of Philadelphia, the field was the site of drug deals, stripped cars, and two fires that seriously threatened the homes and lives of the residents there. It was deemed “undevelopable.” With the help and resources of the Philadelphia Department of Commerce Sustainable Development Office, and the expertise of Drexel University’s Department of Civil, Architectural and Environmental Engineering, UTC remediated the field and safely grew produce. “But,” says Wiener, “we had yet to realize our larger vision of creating a food production and distribution system based in and serving our low-income neighborhood.” 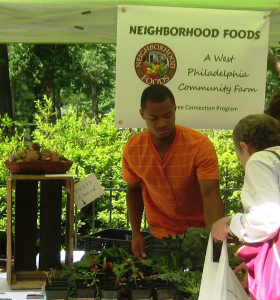 Two years after applying for and receiving FMPP funding, UTC has seen that farm come to fruition, launching a mixed-income community-supported agriculture (CSA), three farmers market sites, and the Neighborhood Foods Produce Stand to both serve and be supported by the West Philadelphia community.

By the end of the 2012 season, 69 Neighborhood Foods CSA shares had been sold to a mix of low and middle-income families, as well as four restaurant clients. Thirty percent of the farmers market revenues go directly to subsidizing the purchase of produce for members of Neighborhood Foods CSA living in homes surrounding their farm, allowing patrons of all income levels to provide fresh nutritious meals for their families. The $28,000 generated from CSA subscriptions help pay the farmers who coordinate neighborhood volunteers who work on harvest days in exchange for produce. “In 2011, we sold 3,280 pounds of produce, generating $7,300. In 2012, that grew to 17,570 pounds, at $46,000.  And as of May, we’ve nearly doubled the number of CSA subscribers since last year.” In 2013, Neighborhood Foods will be at five farmers markets, including two markets that they started from the ground up with FMPP support.  The majority of produce sold at the highest grossing market in 2012 was purchased with Farmers Market Nutrition Program (FMNP) vouchers by low-income mothers and seniors.

Taking a holistic approach to urban farming to build skills and increase fresh food access, UTC involves community members of all ages at all stages of food production and distribution. “Through reviving previously vacant, and often dangerous, areas, the kids and families feel safe to come out, become active and congregate, the neighborhood is coming alive, sharing ideas, and networking,” says Misako Scott, UTC’s Office Manager. Through UTC’s after school and summer programming, children as young as four are given an opportunity to explore in the gardens, and eat what they grow (including mustard greens!). Picnic tables serve as a hub for homework help, environmental crafts projects, biology lessons, storytelling, salad-making parties. Cooking classes teach adults and children how to prepare a variety of previously unfamiliar vegetables. Concerts and cookouts allow neighbors to convene in a safe green space, using produce grown on site by the children. According to Kashif, one of the kids in the program, “Food tastes better when you grow it yourself. It means it’s fresher, it’s local.” 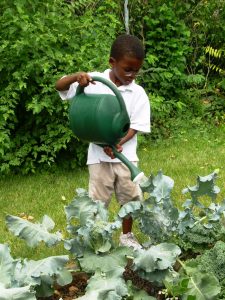 The VeggieKids program involves young entrepreneurs (ages 10-14) in germinating, planting, tending, harvesting, cleaning, weighing, recording, packaging and distributing food to the local residents. VeggieKids set up and manage a weekly produce stand at the Food Trust’s Haddington Farmers Market, where they learn basic business skills– how to engage customers, market their products, keep track of their sales, and cut their costs. They are even conducting market research to assess demand for other products they could grow.  Six former VeggieKids were hired by the Neighborhood Foods CSA as teen leaders for the Philadelphia Youth Network Workready program, providing income and leadership opportunities for teens that excel. “At the beginning I hoped to gain new skills, which I did, but I also became a stronger person while working here,” explains Gregory Dennis, a teen in the Workready program. “I pushed myself; I was dedicated more than before. I did my best so I wouldn’t disappoint the staff or myself.”

These kinds of integrated initiatives help create a pipeline to employment for residents living near the farm.  To date, they have employed seven residents and four interns to help track data, manage farm sales, and coordinate events and educational programs.

A CSA Founders Group advises the organization on the farm’s growth, generating community buy-in and contributing to long-term sustainability.  In 2011, the program was supported by more than 7,300 volunteer hours.

“FMPP was our first federal grant,” say Wiener, “and were fortunate to have help writing the proposal. That first grant gave us the confidence and financial muscle to build a viable system, and leverage other grants to help it expand.”

Through their education and business development programs, Urban Tree Connection has created a model where participants become leaders, reinforcing a sense of ownership and sustainability. Bryant, a High School Summer Intern with Neighborhood Foods, has been participating in Urban Tree Connection programs since he was 10 years old.  “I get to help other people eat better, feel better about themselves, teach them how to grow things, you know– to teach them the things that I learned.”