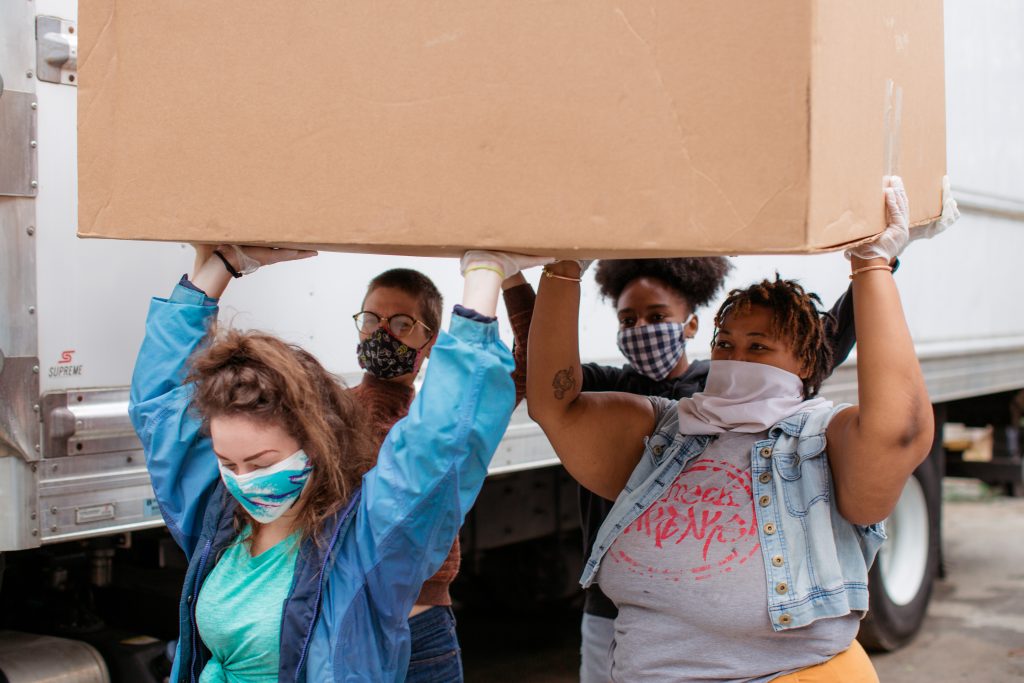 In the last 45 years, farmers markets have gone from nearly nonexistent to a cultural touchstone associated with fresh, high quality, values-based foods and a system that facilitates billions of dollars in sales to small scale, independent farmers. Here at FMC, we eat, sleep, and breathe farmers markets. As a result, we see the incredible impacts markets can and do have on their communities every day. We see how the growth of farmers markets has ripple effects across our food system: farmers markets are changing the way Americans eat, shop, and understand where their food comes from. We also see the inequities at the heart of the system on which farmers markets are built — a system that is deeply intertwined with the historical and present systems of racialized violence in America.

Our mission at FMC — to strengthen farmers markets for the benefit of farmers, consumers, and communities — is impossible to reach without recognizing that farmers markets have benefited from and sometimes contributed to the systems and policies that perpetuate racial inequity and injustice for communities of color. The vision we have for markets goes beyond the feel-good shopping experience narrative to a theory of change where markets, as among the most visible and accessible links between communities of largely urban eaters and mostly rural growers, are also places where enormous and necessary social changes can take place. FMC supports farmers market organizations as entities that should tackle racial injustices in the food system through inclusive design, participatory management, and attention to the ways that our small, local, community-based markets can help to achieve systemic goals. As we celebrate the launch of the Anti-Racist Farmers Market Toolkit this week, which was created by a team of 10 Black food systems experts and led by Head Facilitator Sagdrina Jalal and Lead Researcher Nedra Deadwyler, we would like to take this opportunity to reflect on why farmers markets and the food they sell are such essential spaces for making change; in their communities, in the food system and in particular, in the systems of race in America.

In 2016, the Movement for Black Lives (M4BL) released a policy framework entitled “A Vision for Black Lives” aimed at clarifying the kinds of changes necessary to reduce the impacts of racism in America. As The Counter reported at the time, food was central to these policy recommendations because as Beatriz Beckford, co-founder of the National Black Food and Justice Alliance and member of the M4BL policy team, said in that article: “What we tried to really focus on in the platform is ‘How do you build self-determination? How do you build community ownership? How do you build real, authentic food sovereignty?’ By talking about governance. You do that by talking about community control over food systems.”

Why is changing the way we grow, sell, and eat food so central to dismantling the legacies of racism in American culture? First, because agriculture is one of the primary contexts in which race was invented and used as a tool of control in America: enslaved Black people were brought to this country to make the labor of producing agricultural cash crops such as cotton, tobacco, and indigo less expensive for white landowners. Since the official end of slavery, promises about land-based reparations to Black Americans have been made, broken, and undermined by both official and nonofficial policy over and over again. In 2022, we live in an America where less than 2% of land is owned by non-white people.

In addition, food and the control of agricultural land have often been used as tools to establish and maintain the status quo of racial hierarchy in America. Perhaps the best known example of this is the extermination of the buffalo in the 19th Century, when US government policy targeted buffalo—the primary food source of indigenous nations in the Midwest—in order to undermine their ability to resist US government seizures of more and more land. This policy went hand in hand with laws like the Homestead Act, which gave land seized from indigenous nations to white Americans as long as they agreed to farm it.

Another example of how food and land impact how people participate in governance and make decisions about the communities in which they live is the Freedom Farm Cooperative in 1960s Mississippi. Voting rights activist Fannie Lou Hamer led the establishment of this cooperative farm and pig bank explicitly so that Black Mississipians and their allies would have the resources necessary to make systemic change. In 1960s Mississippi, those who fought for the Black vote lost their jobs and the ability to feed their families, forcing them to make the choice between survival and the right to vote. But, as Hamer famously put it, “if you have 400 quarts of greens and gumbo soup canned for the winter, no one can push you around or tell you what to do.”

As Hamer’s quote illustrates, food is power. This makes farmers markets powerful nodes for community sovereignty and potentially, for systemic change. We are good at making changes. As Richard McCarthy argued in a recent paper for FMC, farmers markets are spaces of disruption and innovation. This may be most evident in the way farmers markets have popularized a variety of crops and varieties (eg. pomegranates, kale, donut peaches, and fuji apples) previously unknown or underappreciated in the American diet. But it goes beyond crops and varieties, as ideas and values common to the farmers market experience have grown from niche concepts to commonplace consumer expectations. Farmers markets have contributed to the growing attention and demand for food that tastes good, is fresh, and is grown using ethical and sustainable production practices. Farmers markets are also responsible for developing, piloting and popularizing key nutrition programs such as produce prescriptions and nutrition incentives in response to community needs. It is important that markets recognize this power and use their ripple effect to address larger social justice issues.

Within the realm of social justice concerns, combating racism and dismantling white supremacy stands out as one of the most important goals for which the tool of farmers markets can be used. The echos of slavery, land theft, share-cropping, gentrification, and redlining remain very present in US agriculture. The perpetuation of racism and inequity are baked into the structures and institutions of our country. This remains true for farmers markets: even as they were developed as an alternative to the traditional supply chain, farmers markets replicated many of the same inequities that exist elsewhere in the country. For example, as the authors of A Recipe for Gentrification: Food, Power, and Resistance in the City show, farmers markets are often seen as one of the first signs of gentrification as they attract more white, affluent and college-educated people to venture into areas they had previously avoided. With 98% of land being held by white farmers, it also stands to reason that the vendor base for markets is extremely white. This is why it is necessary to look beyond the often over simplified, feel good narrative told about farmers markets and ask ourselves harder, more challenging questions.

Instead of continuing these systems of inequity, farmers markets have the power to challenge them. In recent years a group of Black and Indigenous led farmers markets are using farmers markets as a tool for reversing racist and unjust practices and systems within our food system. For example, Come Thru Market in Portland, Oregon operates a farmer incubator program aimed at supporting “beginning farmers of color in Portland in building their farmers market readiness and success,” the Black Farmers Market in North Carolina has a vision of “building and expanding self-sustaining black marketplaces that help solve black social and economic issues,” and the Freedom Farmers Market in Oakland, California “supports the idea of freedom to choose affordable local food and freedom to access fresh food grown by Black farmers.”

But the job of combating racial inequities in the farmers market sector cannot fall only to our Black and Brown leaders; it is all of our work. If farmers markets are to fulfill their promise as agents of change, we must critically examine our established practices and make changes. In the same way that farmers markets don’t just happen, change doesn’t just happen. It takes continual effort, self-reflection, and adjustments to move our market community forward in being actively anti-racist. And change can be hard, uncertain and uncomfortable. Doubly so without support and guidance.  As the leading member based organization for farmers markets, we at FMC believe this change is necessary in order to move markets forward as agents for greater social change and food justice. Reading, reflecting on, and partnering to implement the Anti-Racist Farmers Market Toolkit is one first big step to making that shift. We look forward to continuing this work with all of you.