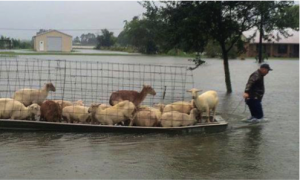 On Thursday August 11, 2016 rain began to fall in and around Baton Rouge, Louisiana at a rate of two or more inches an hour. By the time this “storm without a name” officially ended on August 16, four trillion gallons of water had fallen on the state, almost three times more than had been absorbed during Hurricane Katrina.

The gauges recorded 31.39 inches of rain in Watson, Louisiana, just northeast of Baton Rouge. At least five other locations observed rainfall totals in excess of two feet, all located north or east of Baton Rouge, according to data from The Weather Channel. To offer some historic perspective, Baton Rouge has had an average rainfall of 60.65 inches over the last 30 years. This means they received just about half of their average annual total in a few days. This event came as North Louisiana and Texas were already recovering from the effects of another historic rainfall in March of 2016. (During that flood, one producer in Northeast Louisiana reported rainfall totals on his farm in excess of 23 inches in one week’s time.)

As the rain overtopped the main rivers and continued to fall, it led to backwater flooding of bayous, creeks and culverts, leaving some areas of the state flooded for the first time in decades or ever. More precipitation fell sporadically for the next week after the storm had officially ended, delaying rescue efforts.

In the end, floods inundated 20 parishes (Louisiana’s name for counties), forcing 10,000 people into shelters and 20,000 people to need rescue.

The swath of damage covers three different areas of Louisiana: the North Shore of Lake Pontchartrain, the Baton Rouge area (the hardest hit area) and the Acadiana parishes around Lafayette. 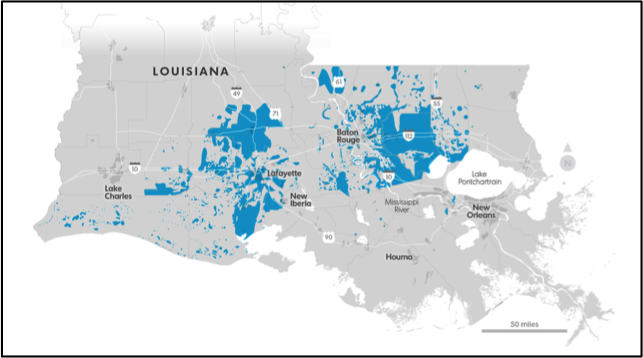 At least 11 river gauges in southeast Louisiana set new record highs. In some cases, the previous flood of record was crushed, such as Amite River at Magnolia where the crest went six feet over the previous record.  The storm then moved slightly to the west and added Acadiana parishes, flooding rural and low-lying parishes along the southern state line. The water equivalent of one and a half Lake Pontchartrains fell on Acadiana in just 48 hours.

Of course, those working with farmers and farmers markets were checking social media and texting producers in those areas as early as Friday morning.  At that point, it was clear that the Baton Rouge and North Shore farmers west of St. Tammany Parish would be affected but it was hoped the losses would be crops only and not homes.

An important point to make: If there is any “luck” in this saga, it is that August is one of the slower planting months of the year for Louisiana farmers, who traditionally have okra, peppers, sweet potatoes, cucumbers, and a few other staples on their market tables but little else. The planting season for fall begins near the end of the month and so it is likely that many will be able to plant for fall and just wait out the soggy fields-that is if their fields are still there! However, most farm machinery, livestock, feed storage, hives, greenhouses and more were destroyed across the affected areas and those costs are not easily recouped. Homes of some farmers were also flooded, meaning the family itself will have to be relocated or temporary housing built to even begin to plan for the rest of 2016.

By midday Saturday, reports were circulating that areas of Baton Rouge and towns like Livingston Parish’s Denham Springs were in such dire straits that this was going to be a long week with many tragic outcomes.

News came in slowly. Some had to wait out rising water that came almost a week later in places such as St. James and St. John parishes below Baton Rouge.

PLEASE SHARE: Hello all, from what we’ve heard all of our market family is safe and sound! We hope everyone else is faring well through this crazy time. Our farmers are all safe, although fields, fences, and feed did not fare so well…If anyone is looking to help out, we are asking for livestock/chicken feed as one of our farms lost everything in the storm. If you’re interested in donating feed to help our farmers out, please email us at hammondmarket@gmail.com or message us on or FB page. Everything, no matter how small is appreciated.

Checking in with our Red Stick farmers and Main Street Market folks today — A lot of fields under water but most homes are okay…Keeping Louisiana and the Baton Rouge region in our prayers! Also for our loved ones who are stuck on the interstate…

Although early reports were mostly positive, heartbreaking stories began to come in over the next week. This from Crescent City Farmers Market vendor Dale and Heather Robertson in Ponchatoula:

“The damage is horrific. We lost most of our crops and a good portion of my home is flooded. Maybe I would estimate $100,000 in damage.”

Where’s the DIRT? When a farmer loses his home, it’s troubling for sure but when he loses his dirt — It’s disaster!  Fletcher Farm so far has reclaimed 15 truckloads of his farm’s dirt from his ditches, bull-dozing to re-grade the land for replanting! All kinds of issues facing our farm friends and in parishes from Opelousas to Ponchatoula and many, many places in between.

Red Stick Farmers Market heroically opened for their Thursday, August 18 market, even though the area was still dealing with massive flooding. By Saturday, August 20 all area markets were reopened, providing comfort to those farmers who could salvage a few items even as staff were assessing the needs of the communities. 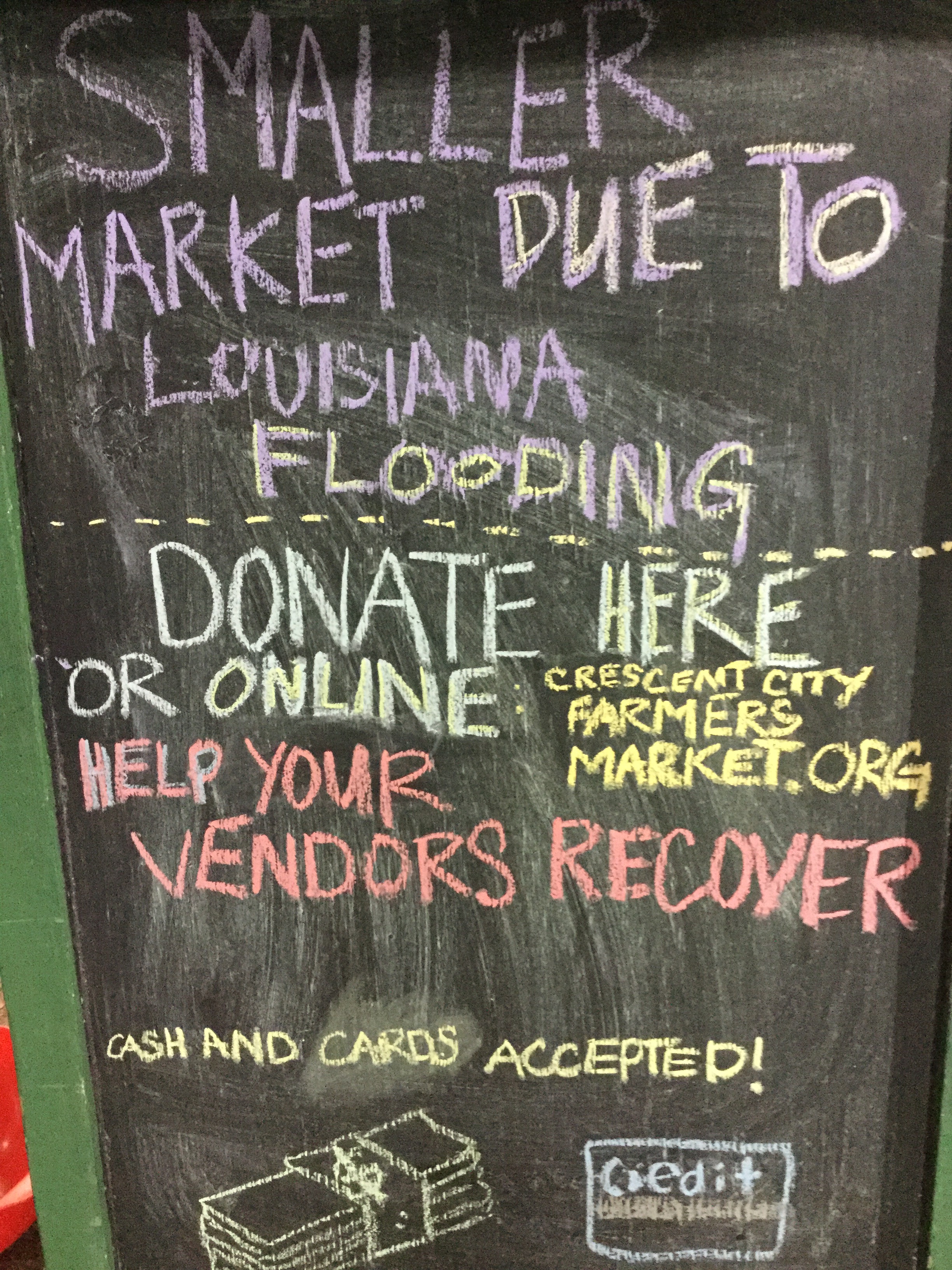 The post from the Lafayette Farmers Market August 19 said it well:

What you can do: 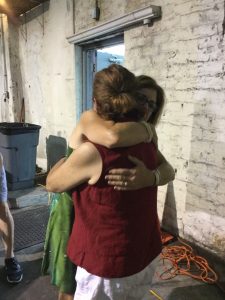 A few more facts about Louisiana:

With an average annual rainfall of 59.42 inches, the state of Louisiana gets 20.2 more inches of rain than the national average (39.17 inches)

Baton Rouge (the capitol of Louisiana) has had an average rainfall of 60.65 inches over the last 30 years, which is 55% more than the average nationwide, and about average in Louisiana.

Authorities in hard-hit East Baton Rouge Parish say they have compiled an “inundation map” showing 58 percent of the parish, which includes Baton Rouge, was flooded.