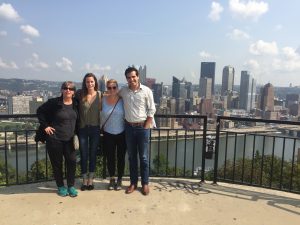 Last week, FMC began work with the City of Pittsburgh to complete a comprehensive analysis of the city’s market system. The goal of the study is to better understand the role of markets throughout the city and develop a plan for growth that improves equitable access to fresh, affordable food, while supporting the region’s producers.

The City of Pittsburgh operates eight markets under the direction of its CitiParks department, with a rich history and a solid base of dedicated market customers. Pittsburgh is also home to some of the nation’s most dynamic food access and policy organizations, including the Pittsburgh Food Policy Council and Just Harvest, which operates the Fresh Access program at 21 of the area’s farmers markets. Now in it’s fifth year, Fresh Access allows recipients of SNAP to increase their purchasing power when they buy produce at their local markets. To date, Just Harvest has completed more than half a million dollars in Fresh Access sales.

During the coming year, FMC looks forward to working with these markets—along with dozens of independently operated neighborhood farmers markets—to further Pittsburgh’s goal of becoming a more prosperous, healthy, and equitable city.