Some Quick Thoughts About Slow Food 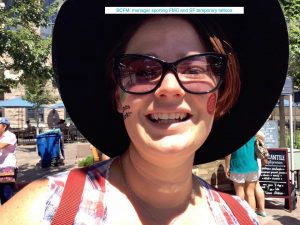 BCFM Longmont Manager Genevieve Gross sporting FMC and SF temporary tattoos. Find a slew of other pics on my blog.

Last week, I traveled to Denver to check out the inaugural Slow Food Nations event. I say inaugural, even though there was an impressive SF event held in 2008 in San Francisco. But this year’s multi-day meeting and festival heralded a new era for Slow Food USA, both in scale and as their annual public event, now to be held each summer in Denver.

(Slow Food International’s legendary Terra Madre is held in Turin Italy every other year, in even years.)

Slow Food is a global, grassroots organization, founded in 1989 by Carlo Petrini*.  Since then, millions of people in over 160 countries have joined the effort “working to inspire individuals and communities to change the world through food that is good, clean and fair for all.” There are over 150 chapters in the USA with more than 6,000 members. Each chapter has its own focus and strategy for its work with food and farming in the local area. Interestingly, in 2015 72% of the U.S. chapters reported that their work on farmers markets was integral to their work and was the largest percentage devoted to any single type of project among the chapters.

Since 2013, Slow Food USA has been headed by my old Market Umbrella colleague (and one of MU’s three founders) Richard McCarthy. I consider it a point of pride to have been one of the people who threw Richard’s name into the SFUSA hat when I was contacted by their search team in 2012. I said then, “Well, here is one person who would be perfect for the job — that is, if he is ready to leave his organization and New Orleans.” It turns out he was ready and the food movement is better for having him working on national and international food and farming issues. (New Orleans is still a little hurt, but it’ll recover.)

Since moving his wife, daughter, Vespa, and poodles to NYC, he has been busy recalibrating the SF team and fine-tuning the focus of the NYC-based organization. To show my support, I became a member of SFUSA when he was hired (having long been a member of SF International) and then again re-upped my U.S. membership last fall after I heard Richard on a podcast with Kentucky ag folks outlining how he knew food and public space activities would be the best bet to be the unifying force in our divided country.  His language was calm while being inviting and even provocative and the response by the rural hosts very positive. It reminded me how desperately we need leaders who can talk broadly and inclusively about food and civic engagement and that we need to support those who offer that leadership.

For those reasons and the chance to see Colorado farmers markets in the summer, I left New Orleans at a time when I have plenty to keep me busy, both at my desk and outside. While most Americans look forward to the heart of the summer, those of us in the Deep South regard this as one of the more difficult seasons as we have to hack away at the greenery every 3-4 days this time of year and can (I swear to you) see it growing right before our eyes. Still, I was curious enough to let my market work and the bamboo creep up for a few days in order to see Denver, where I had not been since 1992 when I was an eager clean water organizer. I won’t spend a lot of time telling you how different the city is from those years, but suffice it to say it was impressively changed.

Friday was the one-day (sold-out) delegate meeting held in downtown Denver, with some great talks on food policy and food justice. The highlight of the first day was a lunch for the hundreds of delegates that focused on school food as an academic subject, presented by SF USA founder Alice Waters who was fondly awarded the name of The O.H. (Original Hippie) over the weekend by NYT writer and moderator Kim Severson. Waters’ Friday lunch illustrated her vision for school lunch in America in both the form and the content of the meal, featuring the traditional Zapotec three sisters: corn, beans, and squash. Waters was gracious and gregarious all weekend. Her tiny self, festooned in flowing scarves was always in the middle of crowds, engaged in spirited ideas about food and farming with those around her.  Her deepest focus was reserved for producers who walked away a little taller after being on the receiving end of her compassion and gratitude for their work and talents. It was clear that her celebrity among her fellow food activists over the weekend was only surpassed by the Santa Claus of food himself, SF founder Carlo Petrini, who spoke with passion and revolutionary zeal at every event that he was featured.

Saturday and Sunday’s line up included dozens of public events such as author signings and talks, cooking demonstrations, producer displays showcasing foods from indigenous cultures, food and drink facing extinction included in the Slow Food Ark of Taste, education workshops on organizing around food as well as ticketed block parties and dinners in various public spaces like Union Station and Larimer Square, with SF delegates serving as hosts and speakers during the weekend festival. The latter space was transformed into a 2-day pedestrian-only culinary crossroads and included a taste marketplace with 100 exhibitors and producers, an outdoor culinary stage and artists renditions of the Slow Food snail for kids to climb.

The other main event space, Union Station had an extended farmers market outside for both days from 9-2, rather than just the usual Saturday market hours. This producer-only market is only a year old and managed by the flagship organization Boulder County Farmers Market, headed by Colorado Biz’s 2015 CEO of the Year Brian Coppom, who also recently became an FMC board member. Coppom was the emcee at the chats and the cooking demonstrations featuring SF chefs, and showed a well-defined comedic flair for public speaking. Elyse Wood, BCFM’s Operations & Community Manager ably organized every detail of the added events even as she took time to present at SF panels on both days, rushing back into market clothes to help break down or to handle the vendor reimbursements. The actual market staff Miguel Martinez, Beth Bejcek, and market coordinator Hannah Keitel managed the usual unheralded and mostly unseen regular market duties on both days with aplomb.

Slow Food’s “Coffee and Conversation” was held bright and early at the market’s information booth. Saturday, it featured best-selling cookbook author Deborah Madison (who once served as the market manager of the Santa Fe Farmers Market) while Sunday’s corner had legendary Mississippi farmer and farming cooperative leader Ben Burkett.  They both drew a crowd of locals and visitors to chat about markets and food who cheered their ringing of the opening market bell and the presentation of a basket of goodies by the market as thanks for their long leadership in the movement. On Saturday afternoon, FMC (lucky me as the staff on hand) and BCFM sponsored a networking session with Burkett which was attended by market vendors, managers from across the US and Slow Food delegates and volunteers. 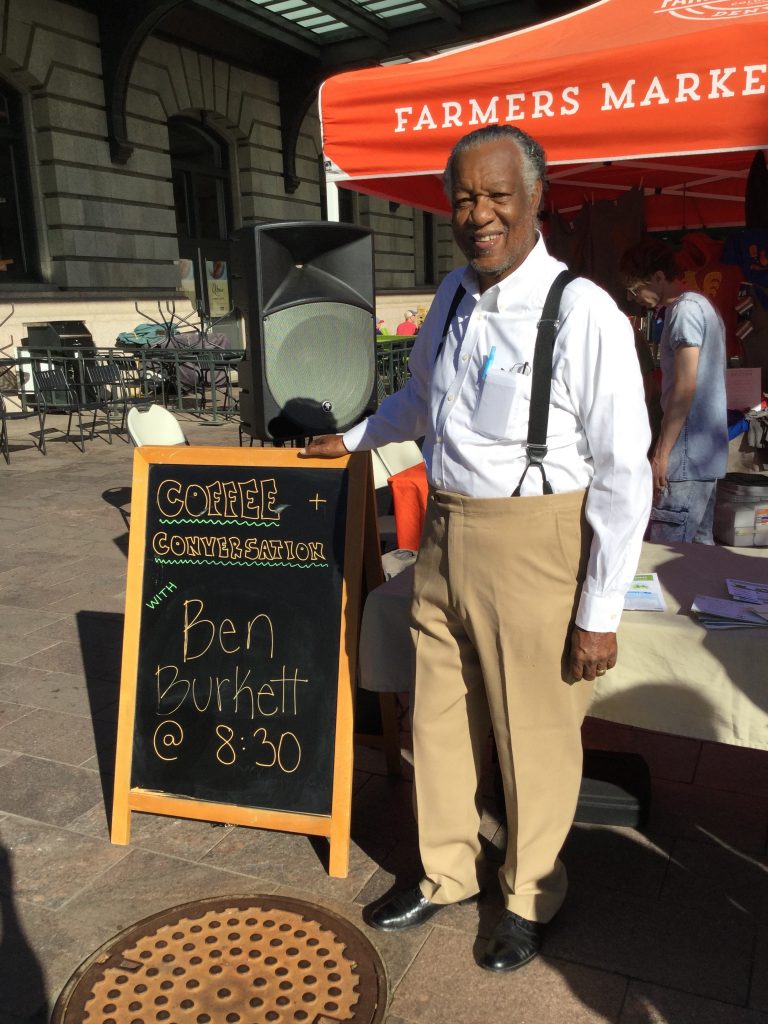 Inside the gorgeously renovated train station and hotel, one could purchase SF merchandise or peruse the list of events, attend author signings at one of the two area Tattered Cover Bookstores with SF events, go downstairs to workshops on topics ranging from food and philanthropy to home fermentation or use the space at the Terminal Bar to schedule meetups for SF chapters.

The evenings had dinners with educational components like the Whole Beast dinner where each chef chose a section of the pig for their dish, or a zero-waste dinner from chefs Steven Satterfield, Daniel Asher, Jamey Fader, Evan Mallet, Alex Seidel, Drew Deckman which had a menu created from the food scraps collected over the weekend.

Still other events were led by leaders such as Polyface farmer Joel Salatin, “the gangsta gardener” Ron Finley who made the crowd hug and hold hands, Wholesome Wave’s founder Michel Nischan who threw sobering facts and figures about food insecurity and impressive ones on incentive successes out to the crowd, musician Jack Johnson who talked respectfully about young people in the movement, Wes Jackson from The Land Institute,  Ricardo Salvador, the director and senior scientist of the Food and Environment Program at the Union of Concerned Scientists and well, about 200 more names…

Really, the only thing slow about that weekend was how we felt each morning as we headed back out to another day of camaraderie and food.

So market leaders, I hope you can try to get there next year. I promise to be there again, hanging (mostly) at the market with about 20,000 other attendees, just like this year. 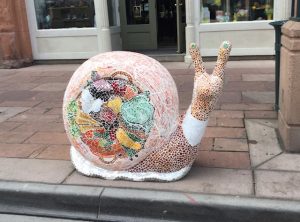 Slow Food’s Snail could be found around the city, showcasing different artists imagining their purpose. The snails were then auctioned off to lucky locals.