SNAP Redemptions at Markets Continue to Increase, and New Federal Support is on the Way

Farmers markets have seen exponential growth over the past decade, and beyond the increase in number, 2013 brought expanded depth and breadth of services offered to market communities. One important indicator of this trend is increased use of Supplemental Nutrition Assistance Program benefits (SNAP, formerly food stamps) at farmers markets across the country. In 2013, SNAP spending at farmers markets grew to  $17.5 million (the 2013 numbers were recalculated and reduced because several retailers were incorrectly labeled as farmers markets). Spending has nearly doubled since 2011, when SNAP redemption at farmers markets totaled $11.7 million. In this same two-year time period, there has been a ~63% increase in the number of farmers markets equipped with the Electronic Benefit Transfer (EBT) machines required to make SNAP transactions. Not only does SNAP access at farmers markets make fresh, local food available to low-income Americans, it offers the added benefit of increased revenues for local farmers. 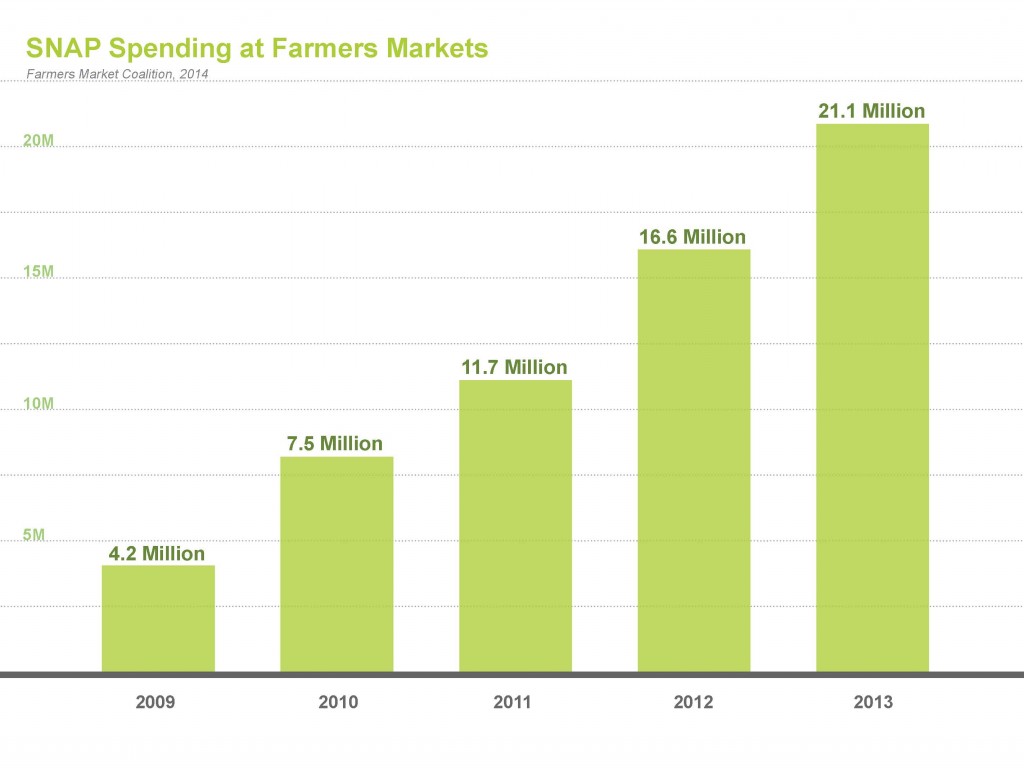 Editor’s Note: The 2013 data was recalculated because several retailers were incorrectly labeled as farmers markets. This reduced total SNAP redemptions from $21 million to $17.5 million. 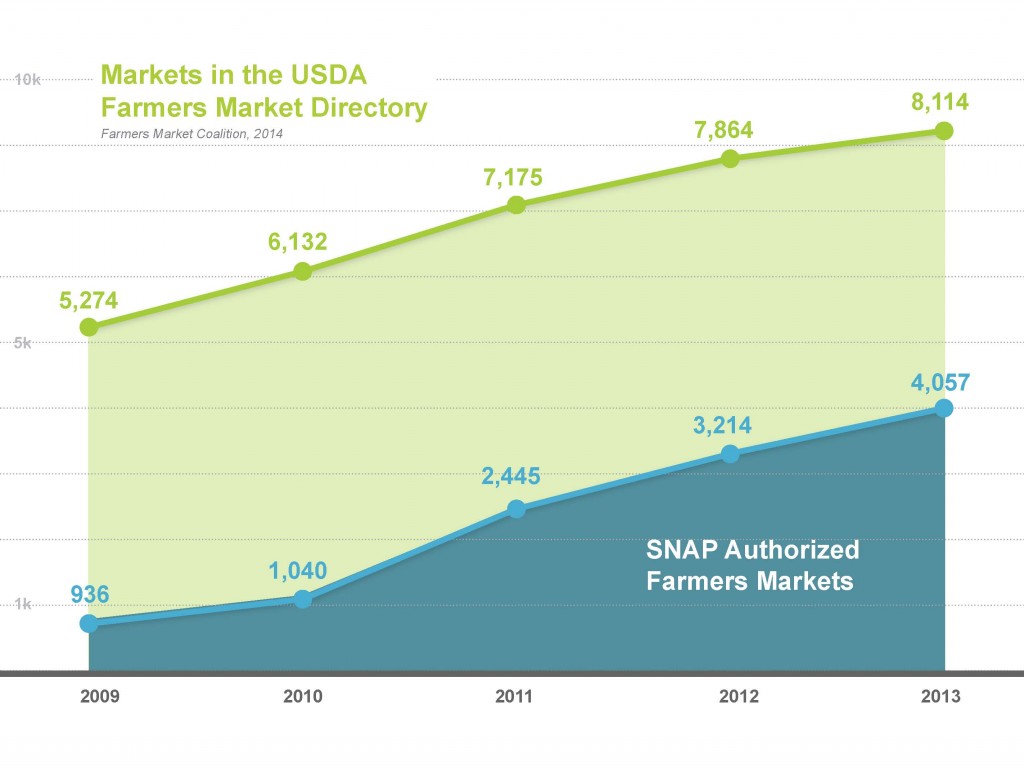 EBT machines started appearing at farmers markets in 2004. Since that time, there has been a 400% increase in SNAP redemption at markets. These machines allow SNAP beneficiaries to used their EBT cards, which function like debit cards, to purchase tokens that can in turn be used to purchase approved products from market vendors. There are several different technology options available for farmers market EBT machines: hard-wired card readers connected to a telephone line; wireless card readers; or smartphones outfitted with a card reader and the appropriate app. There are now just over 4,000 markets across the U.S. that are authorized SNAP retailers—an increase of ~785 markets since 2012.

But authorization is only the first step in running a successful SNAP program. Farmers markets with high SNAP redemption rates have taken deliberate steps to notify, educate and attract SNAP customers—a challenge that has spurred a wide array of creative efforts across regions. Throughout the country, incentive programs have emerged as one of the most popular and effective means of bringing new SNAP customers to markets. Incentive programs typically use federal, foundation, or local funds to match or double the amount of money SNAP customers can use at the market.  For example, the EBT Bonus Token Program run by the Santa Fe Farmers Market Institute in New Mexico allows a SNAP user to take $20 out of her SNAP account, and doubles this amount to provide the customer $40 to spend at market. The doubling program  has significantly increased the amount of SNAP benefits redeemed each month. In September 2010—the first month of the incentive program—SNAP sales increased by 73% from September 2009. SNAP usage at the market continues to increase steadily. As of September 2013, the SNAP usage at the Santa Fe Farmers Market had more than doubled since September 2009.

Wholesome Wave, a Connecticut-based non-profit, has been one of the pioneers of SNAP incentives, in 2008 launching programs at farmers markets in Connecticut, California, Massachusetts, and New York. The Double Value Coupon Program, now active in 24 states and the District of Columbia, increased farmer revenue by $2.4 million in 2012 and reached 40,000 SNAP customers. Wholesome Wave cites dedicated efforts on the part of both non-profit organizations and policy makers as driving the growth of SNAP use at farmers markets, as evidenced last year in Georgia. Georgia’s farmers markets saw the highest SNAP redemptions of any state in fiscal year 2013, at $3.8 million dollars—more than double the previous year’s redemptions. The dramatic increase comes just two years after Georgia legislature began appropriating over $6 million annually to the management of state farmers markets. 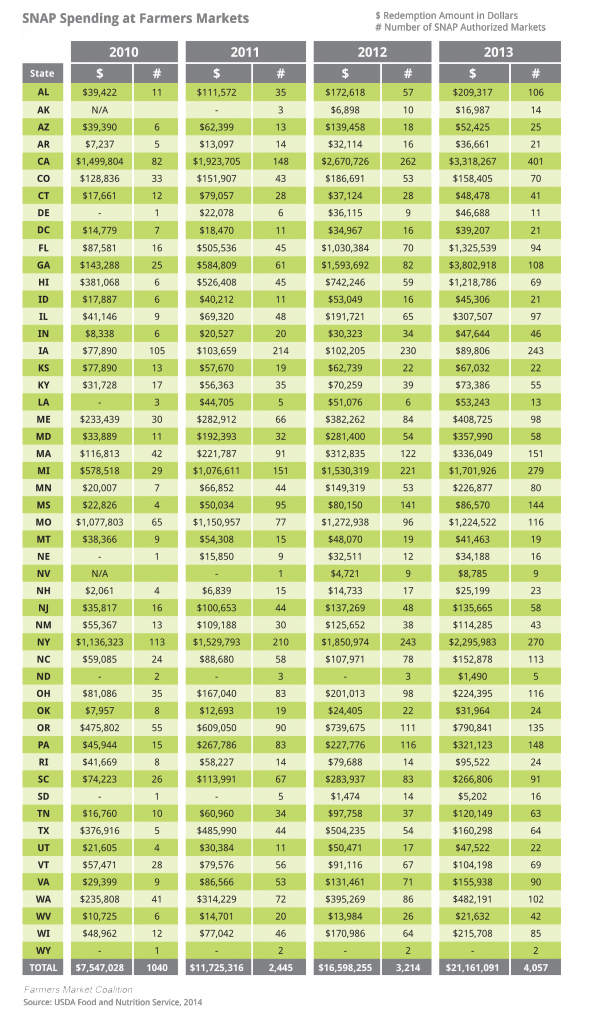 Editor’s Note: The 2013 data was recalculated because several retailers were incorrectly labeled. This reduced total SNAP redemptions from $21 million to $17.5 million and increased the number of authorized markets and direct-marketing farmers to 4,071.

Significant statewide support—whether in funding, tax exemptions, staffing or marketing assistance—is present in each of the seven states reporting over $1 million in SNAP redemption at markets in 2013 (Georgia, California, New York, Michigan, Florida, Missouri, Hawaii). Michigan’s impressive growth over the past three years can be attributed to collaborative effort between the Michigan Farmers Market Association (MIFMA), the Fair Food Network, and supportive state government. In 2009, Fair Food Network started “Double Up Food Bucks” in five farmers markets in Detroit. Engaging MIFMA and its members has allowed the program to expand to 100 markets across Michigan. The program is effectively working to fulfill Fair Food Network’s mission of increasing consumption of fruits and vegetables in low-income populations, with the added benefit of helping to generate an additional $1.7 million in revenue for Michigan’s farmers in 2013.

The EBT machines required for SNAP use at farmers markets are extremely costly (generally in excess of $1,000 each), and are prone to frequent—and equally costly—malfunctioning. For markets using smartphones equipped with card readers, the app required to process EBT transactions must be licensed yearly, and only runs on Apple devices, which are themselves expensive. Many markets cannot afford to purchase EBT machines, and even if they can, lack the resources to hire staff to handle the transactions, bookkeeping and outreach. Having centralized EBT machines at farmers markets entails a considerable increase in staff time. There must be a staff person present for the duration of the market to run transactions; these transactions must be reconciled after each market and tallied on a regular basis, and farmers must be reimbursed for the SNAP payments they accept.

In Vermont, markets are charged a monthly fee to offer point-of-sale machines from a third-party processor, and are also charged a small amount for each transaction. For markets with many market days per year, these fees can add up to a considerable amount: the Burlington, Vermont farmers market pays over $1,200 a year in fees, and spends $3,200 paying staff to manage their EBT system. Since the majority of markets in the US are volunteer-run, with very small budgets, the cost of running an EBT program is significant.

Federal Support for SNAP at Farmers Markets
In May of 2012, the USDA announced grant funding through the Consolidated and Further Continuing Appropriations Act of 2012 to increase SNAP access at farmers markets. $4 million was appropriated for the purchase or rental of a wireless device and related SNAP fees for markets. In its first year, this funding was distributed through state agencies, and staffing limitations, outreach barriers, and difficult eligibility requirements prevented many interested markets from accessing the funds. According the legislation, only markets that had not received SNAP authorization before Nov 18, 2011 were eligible to receive a free EBT machine. This specification prevented markets that had gone through the SNAP authorization process, but never actually purchased a machine, and markets that were using antiquated EBT systems, or even paper vouchers from accessing new EBT equipment.

In 2013, another $4 Million was appropriated, in addition to the rollover of the unused 2012 funds. To streamline the process of getting the funds and EBT machines distributed, FNS contracted one, national vendor to identify, recruit and walk markets through the process of becoming SNAP authorized and obtaining free equipment. The resulting website—MarketLink.org—is now the portal for markets and individual farmers hoping to receive the latest in EBT technology. Through MarketLink, vendors and markets can receive an iPhone-based EBT system with printer, a license for the Mobile Market+ app that allows them to process and track SNAP transactions, with two years of data and transaction fees included. The system is free to markets and individual farmers that meet the legislation’s eligibility requirements, and available for $2,100 for those that don’t. The first shipment of MarketLink systems is scheduled to go out this month.

The availability of MarketLink services will help increase the number of markets offering SNAP, as becoming SNAP authorized and purchasing equipment are major hurdles facing market managers. Whether we see a rise in SNAP redemption rates will depend on the participating markets’ ability to perform outreach to their low-income community members, and provide the incentives and resources required to attract and retain SNAP customers.

Another federal move to support SNAP at farmers market came in this year’s farm bill. While the new bill unfortunately cut overall funding for SNAP, it introduced the Food Insecurity Nutrition Incentive (FINI)—a program that aims to bring SNAP incentive programs to markets and retailers across the country. Over the course of five years, FINI will provide $100 Million to match SNAP benefits spent on fruits and vegetables. If implemented appropriately, this program has the potential to significantly increase the number of SNAP dollars spent at markets. The FINI language states that when administering funds, priority should be given to projects using direct-marketing, locally grown fruits and vegetables and projects that that connect low-income consumers with agricultural producers. However, there is no specific amount of funding designated to these efforts, opening up eligibility to any retailer that offers fruits and vegetables in any form. The USDA is tasked with developing FINI rules, guidance and grant applications that will further define the program requirements. The process of creating these regulations has begun and will continue over the next couple months. FMC and our partner organizations at NSAC are committed to working with the USDA to ensure that FINI succeeds in bringing fresh, local fruits and vegetables to the low-income Americans who need it most.

2023 Call for FMC Board Nominations